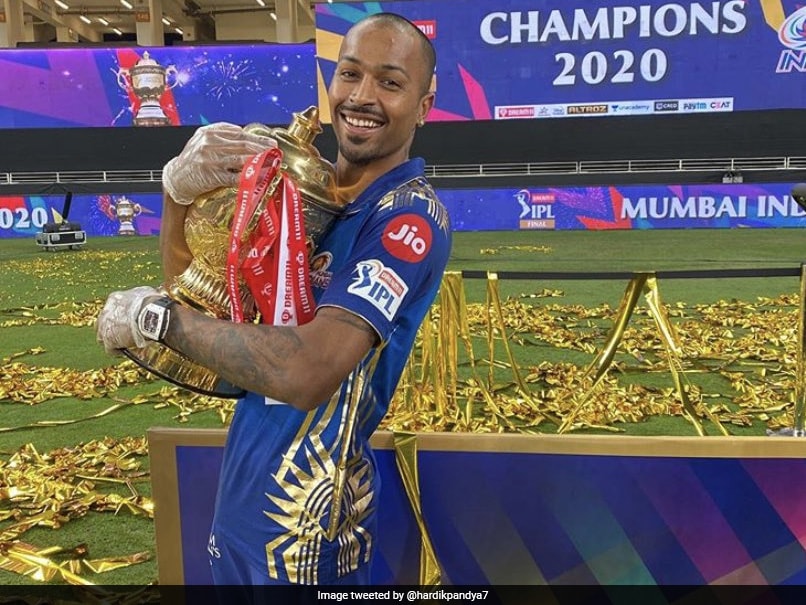 Mumbai Indians all-rounder Hardik Pandya dedicated the team's Indian Premier League (IPL) 2020 triumph to his son Agastya. Mumbai Indians chased down their target of 157 runs with eight deliveries to spare to beat Delhi Capitals by five wickets and lift their fifth IPL trophy. "This one's for you, Agastya," he tweeted, along with a picture of him lifting the trophy. "Love this team!" added Hardik, who scored 281 runs in 14 matches at an impressive strike rate of 178.98 this season.

Agastya was born on July 30 to Hardik and his partner Natasa Stankovic. Hardik and Natasa announced their engagement on January 1.

Hardik Pandya has been a key player in Mumbai Indians' campaign. Despite not being able to bowl, he played whirlwind knocks at the death to help Mumbai Indians defend their crown.

In the final on Tuesday, put in to field by Shreyas Iyer, Mumbai Indians struck in the very first delivery of the IPL 2020 final to dismiss Marcus Stoinis. Delhi were soon reeling at 22/3 before Iyer and Rishabh Pant hit half-centuries to take them to 156/7.

Boult was the star with the ball, taking three wickets, including two in the Powerplay.

Quinton de Kock gave Mumbai a quick start, before edging behind off Marcus Stoinis. Rohit Sharma and Suryakumar Yadav kept things ticking until a mix-up saw Suryakumar get run out.

Rohit Sharma went on to score a 51-ball 68 before being dismissed by Anrich Nortje. But Ishan Kishan, who stayed unbeaten at 33, saw the game out with eight deliveries to spare.

Hardik made three runs before losing his wicket with the scores tied. However, his brother Krunal hit the winning run to finish the job for Mumbai Indians.

Trent Boult Mumbai Indians vs Delhi Capitals, Final Cricket
Get the latest updates on ICC T20 Worldcup 2022 and CWG 2022 check out the Schedule, Live Score and Medals Tally. Like us on Facebook or follow us on Twitter for more sports updates. You can also download the NDTV Cricket app for Android or iOS.