IPL 2020, CSK vs RR: MS Dhoni's 200th IPL match ended in a defeat for his team Chennai Super Kings as they lost to Rajasthan Royals by seven wickets in Abu Dhabi on Monday. 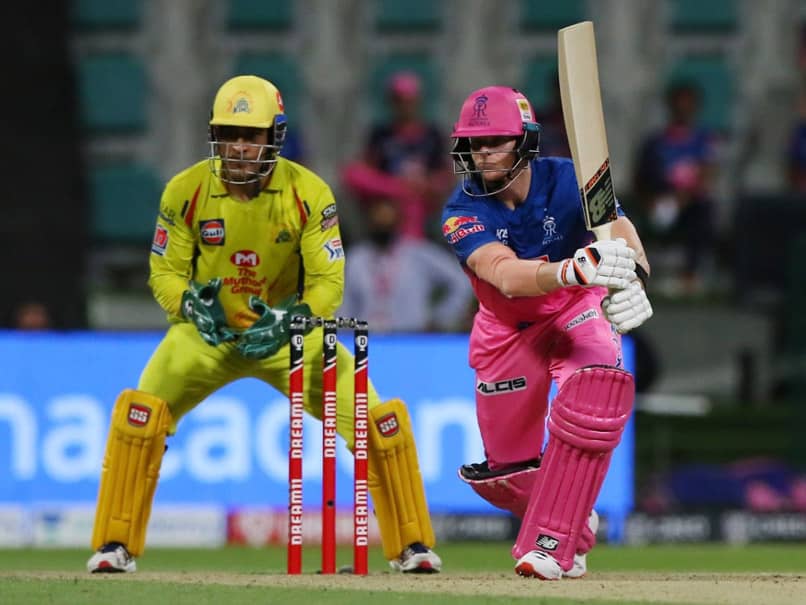 MS Dhoni's 200th Indian Premier League (IPL) match was received as indifferently by his team Chennai Super Kings (CSK) as Dhoni received the news that the clash against Rajasthan Royals (RR) was his 200th appearance. The batsmen struggled to get going on a slow Abu Dhabi wicket, slowed further by a game played mere 24 hours before on the same surface, and after a good start with the ball the bowlers too tapered off as quickly as Jos Buttler (70 not out) got going. In the end, Rajasthan Royals triumphed by seven wickets to climb to the fifth position in the points table even as CSK sunk to the bottom.

The 39-year-old CSK skipper was told at the toss by broadcaster Danny Morrison that the game was his 200th in the T20 league. Dhoni replied plaintively, saying he was unaware of the fact until Morrison told him so.

After coming together at 56 for 4 at the start of the 11th over, Dhoni put together 51 runs for the fifth wicket with Ravindra Jadeja in 7.4 overs – just over run-a-ball. But just when it looked like one of the two would tee off at the death, the senior partner was run out for 28.

The result was that CSK finished with an under-par 125 for 5. The bowlers, though, looked promising as Deepak Chahar bowled Ben Stokes and got Sanju Samson caught down the leg side and Josh Hazlewood did for Robin Uthappa.

RR were 31 for 3 at the end of the Powerplay but since then Buttler and captain Steve Smith (26 not out) played the waiting game to get their eye in and then dominated the CSK bowling to get their team to an easy win.

“It's not always supposed to go your way. That's why what we try is going back to the process and see if the process is wrong or maybe we weren't able to execute. Result is always a by-product of the process,” Dhoni said after the match.

CSK now have six points from 10 matches and can only get to a maximum of 14 points from here.

With the team's chances of making the playoffs now dependent on the results of other sides in addition to their own, will there be changes in the set-up? Dhoni was cautious against constant chopping and changing of teams but relented eventually saying the bench-warmers may a few opportunities now to play without pressure.

“Because what happens is after three-four-five games you're not sure of anything. You want to give guys a fair go (and) then if they're not performing then you switch and go to someone else and give them a run. Insecurity is something you don't want to prevail in the dressing room.

“Fair enough, this season we weren't really there. Also, there were few chances to the youngsters. Maybe we didn't see the kind of spark that they could've given us to say okay you know push the experienced guys and make space for them.

“But what this result has done is give those youngsters whatever is left in our league stages. They will get a chance and have no real pressure on them so they can go out and express themselves,” he added.

Winning captain Steve Smith lauded Buttler for his match-winning innings. “Buttler took the pressure off me. I just knocked it around, and he just batted the way he usually does. He always maintains a good strike-rate,” said Smith.

However, the bowlers did a great job of restricting a strong CSK top four to set things up for the batsmen. Leg spinners Shreyas Gopal and Rahul Tewatia picked up one wicket apiece and gave away just 32 runs in their eight overs.

“I thought we bowled well in the powerplay. The spinners bowled good lengths, with the googlies and leggies, building a lot of pressure,” Smith said.

“Tewatia and Shreyas have been sensational for us.”

Ravindra Jadeja IPL 2020 Chennai Super Kings vs Rajasthan Royals, Match 37 Cricket
Get the latest updates on IPL 2020, check out the IPL Schedule for 2020 and Indian Premier League (IPL) Cricket live score . Like us on Facebook or follow us on Twitter for more sports updates. You can also download the NDTV Cricket app for Android or iOS.