Chennai Super Kings are currently in the United Arab Emirates for the Indian Premier League. The club posted a photo of MS Dhoni and Shane Watson, which sent plenty of good vibes to fans. 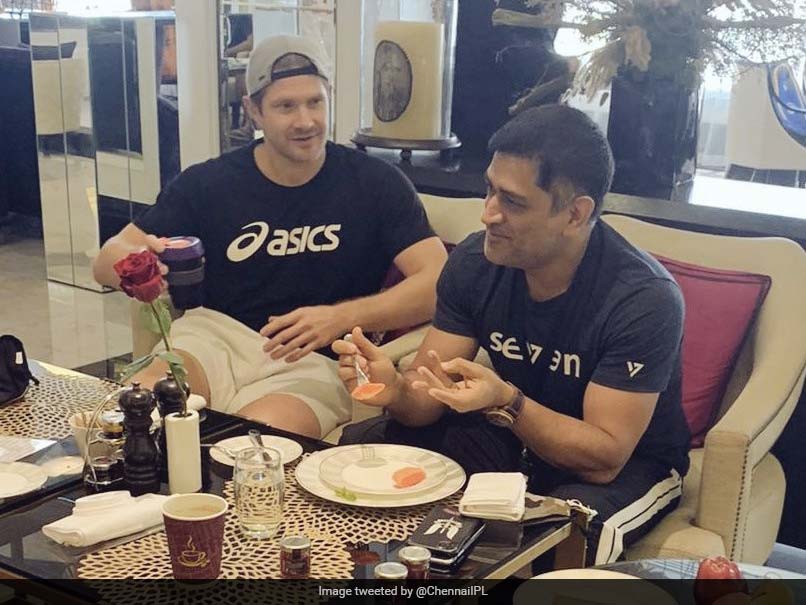 MS Dhoni and Shane Watson eat breakfast in the CSK team hotel in the UAE.© Twitter

In what could be seen as good news for Chennai Super Kings (CSK) fans, the Indian Premier League (IPL) club tweeted a photo of captain MS Dhoni and Shane Watson. The photo that showed them at breakfast in the CSK team hotel at the United Arab Emirates (UAE), was a positive sign for a team hit with reverses lately. The photo was captioned as, "Watto Thala Dharisanam! #WhistlePodu".

The photo also calmed down the CSK fans, who are currently frustrated due to the COVID-19 cases within the team, and the sudden departure of Suresh Raina and now Harbhajan Singh. A particular CSK fan replied to the tweet, "That smile brings back confidence in csk fans".

Last week, the revealed that 13 members of the squad had tested positive for coronavirus, which included two players.

That smile brings back confidence in csk fans

The photo also seems to have calmed down fans after the Raina incident. Earlier, multiple reports alleged that Raina had a rift with Dhoni.

Raina had however said later that such stories were fabricated. Raina revealed that it was a personal issue. He also stated that there was no rift between him and Dhoni. Speaking to NDTV, he also praised CSK's team management and BCCI for their job in keeping everyone safe in UAE.

Here is what some fans had to say about the photo of Dhoni and Watson:

The IPL has been shifted to UAE due to the rising coronavirus cases in India. The franchise-based T20 league starts on September 19, and will end on November 8.

Shane Watson IPL 2020 Cricket
Get the latest updates on Fifa Worldcup 2022 and check out  Fifa World Cup Schedule, Stats and Live Cricket Score. Like us on Facebook or follow us on Twitter for more sports updates. You can also download the NDTV Cricket app for Android or iOS.