The availability of England and Australia players from the first match of IPL 2020 will certainly boost Rajasthan Royals' squad led by Steve Smith. 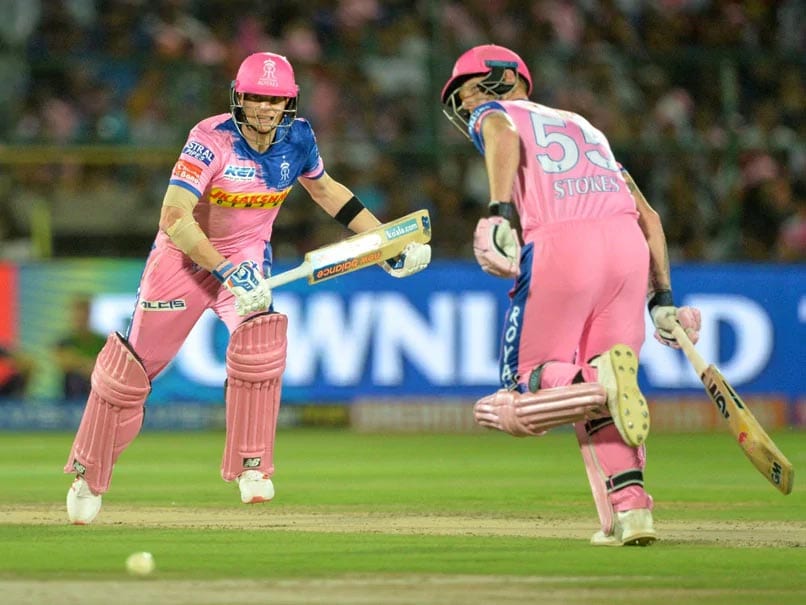 Rajasthan Royals are heavily dependent on their overseas players like Steve Smith and Ben Stokes.© AFP

Jake Lush McCrum, the Chief Operating Officer (COO) of Rajasthan Royalson Saturday confirmed that the Board of Control for Cricket in India (BCCI) has updated the protocols for the upcoming Indian Premier League (IPL) and as a result, players from England and Australia will be available from the first match of the T20 tournament.

England and Australia are slated to square off in three T20Is and three ODIs, beginning September 4 and the availability of players from both sides for the first few matches of the IPL was in question earlier.

The bilateral series will get over on September 16, and earlier the BCCI had indicated to franchises that it was unlikely to relax the mandatory seven-day quarantine period that players had to undergo after arriving in the UAE.

However, in an exclusive interaction with ANI, the Rajasthan Royals' COO confirmed that BCCI has decided to update its protocols regarding the quarantine norms.

"The BCCI protocols have actually been updated in the last few days and I'm pleased to say our English and Australian stars playing in the series pre IPL should be available for our first IPL match. Either way, we have a quality squad with the depth to manage any situation," McCrum told ANI.

"The English and Australian players will be competing against each other in a high-quality series right before the IPL which has many positives, the most important being it will enable them to be at full match fitness. I'm sure they will hit the ground running in the UAE for the IPL," he added.

Royals have the most number of England and Australia players in their squad, with Steve Smithleading the franchise. Several star players such as Ben Stokes, Jos Buttler, Jofra Archer are also a part of the team.

McCrum also shed light on how the process will unfold if a player ends up testing positive for coronavirus during the tournament. The Rajasthan Royals COO spoke about the COVID Task Force that has been set up by the franchise.

"Suspected or positive cases will immediately be isolated from the team and the case will be managed by the team doctor in accordance with the IPL medical team. Contract tracing will begin immediately. The BCCI has put together a list of accredited hospitals that will be fully equipped to handle all such cases. All cases will however be treated as per set guidelines and protocols of the UAE government," McCrum said.

As per SOPs issued by the BCCI, the players have to undergo RT-PCR tests on Day 1, 3, and 6 of the quarantine phase and then they will be entering the bio-bubble provided they test negative on all three occasions.

"We have set up our own COVID-19 taskforce, which will act as a response team for all queries and any action to be taken during the tournament. This team is being led by Anuja Dalvi, the Indian female physio who has international experience in cricket and other sports, supported by team physiotherapist John Gloster and team doctor, Rob Young. They will be responsible for regular monitoring and medical assessment to ensure the safety of the entire team staying in the UAE," McCrum added.

Talking about this association, McCrum said, "We are extremely proud to be welcoming Niine to the Royals family. The impact that the announcement created across social media around the world was really exciting. At Rajasthan Royals, we have always had a clear focus on Women Empowerment and are driven to make a significant long term impact."

"Niine's social purpose is something which holds great value for us and it was one of the most striking conversations we have had with a partner. We are passionate about making an impact on issues rarely touched on in the sport, and the ability to raise awareness around female hygiene, using IPL and its viewership of around 800m, is a perfect example," he added.

The 13th edition of the IPL will be played for 53 days, from September 19 to November 10, across three venues -- Abu Dhabi, Sharjah, and Dubai.

The final match is scheduled to be played on a weekday, i.e. Tuesday, for the first time in the history of the T20 tournament.

Jofra Archer IPL 2020 BCCI Cricket
Get the latest updates on ICC Women's Cricket World Cup 2022 and IPL 2022, check out the Schedule , Live Score and IPL Points Table. Like us on Facebook or follow us on Twitter for more sports updates. You can also download the NDTV Cricket app for Android or iOS.