Australia fast bowler Josh Hazlewood said he was a "bit concerned" by a coronavirus outbreak at his Indian Premier League franchise but insisted he was fully focused on the national side's white-ball tour of England. 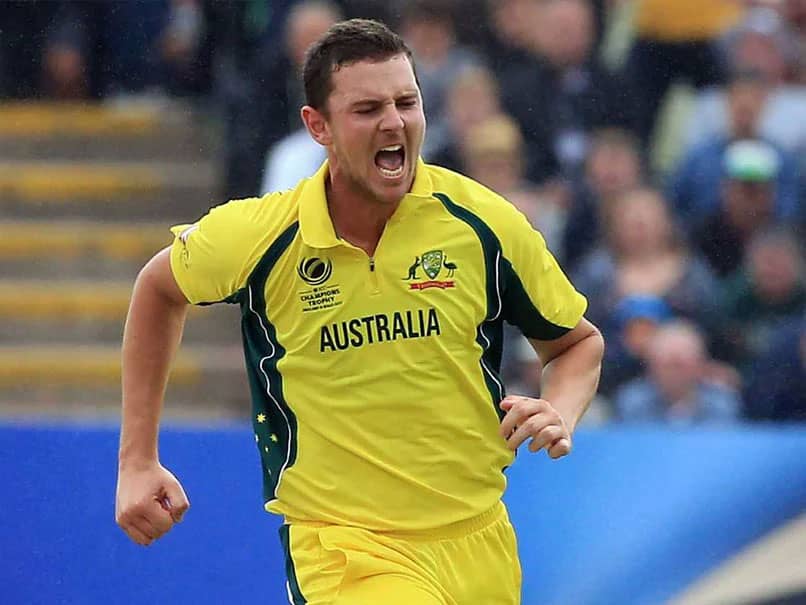 Josh Hazlewood is a member of the Australia squad which is currently on England tour.© AFP

Australia fast bowler Josh Hazlewood said Monday he was a "bit concerned" by a coronavirus outbreak at his Indian Premier League franchise but insisted he was fully focused on the national side's white-ball tour of England. Hazlewood is a member of the Australia squad who are set to face 50-over world champions England in three Twenty20 and three one-day internationals from September 4-16.

Following his Australia stint, the 29-year-old Hazlewood is set to head to the United Arab Emirates, where this year's edition of the lucrative IPL T20 franchise tournament is being staged because of Covid-19, and play for the Chennai Super Kings led by India great MS Dhoni.

But IPL officials have reported that 13 Super Kings personnel, including two players, tested positive for coronavirus during tests administered from August 20-28 and have been isolated.

"The franchise, we have a group WhatsApp, with all the information that comes through, it's, obviously, a little bit of a concern, yeah," Hazlewood told reporters in a conference call from Australia's training base in Southampton on Monday.

"You ideally would have no cases.

"They are, obviously, in quarantine now and I think they finish up over the next few days. All my focus is, obviously, on this tournament at the moment. Once that IPL becomes closer, we will think more about that."

The Australia squad are currently in a bio-secure bubble at Southampton, the venue for a T20 series that starts on Friday, before they travel to Manchester for the one-dayers.

Several international sides have already toured England this season, with Hazlewood saying: "They have, obviously, had West Indies, Pakistan and England through already, ironed out a few kinks, I suspect. We are probably spending more time with each other than we would normally, which is a good thing."

Hazlewood has played 51 Tests and 48 ODIS but appeared in just seven Twenty20 internationals, the last against India at Mohali in 2016.

Nevertheless, Hazlewood, who took 1-33 in seven overs during an intra-squad warm-up match at Southampton on Sunday as a Pat Cummins XI defeated an Aaron Finch XI, still harbours hope of breaking into the Twenty20 team ahead of next year's T20 World Cup in India.

"I am pretty aware of where I sit roughly," he said. "The team keeps winning and the guys are going well, especially the bowling unit."

England beat Australia in the semi-finals of last year's World Cup before defeating New Zealand in a thrilling final at Lord's.

They remain a formidable white-ball side as they showed when, with captain Eoin Morgan top-scoring with 66, they chased down a stiff target of 196 to beat Pakistan by five wickets in the second T20 international at Old Trafford on Sunday.

England could include the likes of Joe Root and Jos Buttler when they name their squad for the Australia series later Monday, having previously kept their Test and limited overs squads in separate 'bubbles' this season.

"They had a good chase against Pakistan, so they know their roles and their white-ball team is as good as ever," Hazlewood said.

Asked who had stood out for him lately, Hazlewood pinpointed two batsmen: "It's probably a few of the new guys who I haven't seen a great deal of: Tommy Banton, Dawid Malan -- I've seen him but he's in the runs again.

"It is a tough gig...England are flying at the moment. It's always tough here but we expect to win every game we play."

England Cricket Team
Get the latest updates on India vs England Series, India vs England , live score and IPL 2021 Auction . Like us on Facebook or follow us on Twitter for more sports updates. You can also download the NDTV Cricket app for Android or iOS.