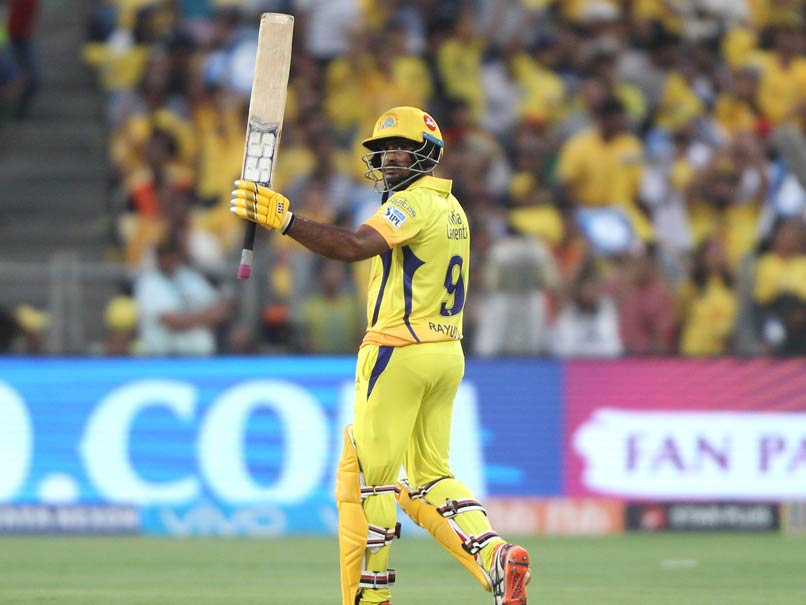 Opener Ambati Raydu smashed his maiden century in the Indian Premier League (IPL) as Chennai Super Kings coasted to an easy eight-wicket win over Sunrisers Hyderabad to virtually seal a play-offsberth on Sunday. Rayudu, who has been in great touch this season, remained not out on exactly 100 which he made from 62 balls with the help of seven fours and seven sixes as CSK chased down the target of 180 with one over to spare. The 32-year-old Rayudu stitched a 134-run stand with senior partner Shane Watson (57) for the opening wicket to lay the foundation of the comprehensive win. Watson, also one of the centurions of this IPL, hit five fours and three sixes during his 35-ball knock. Captain Mahendra Singh Dhoni remained not out on 20 from 14 balls as CSK reached 180 for 2 from 19 overs.

Rayudu carried his bat through the innings as he crossed 500 runs this season. He is on the third spot among top run-getters with 535, behind Sunrisers captain Kane Williamson (544) and Kings XI Punjab's Lokesh Rahul (537).

The Sunrisers, who have already qualified for the play-offs, remained on top of the table with 18 points from 12 matches while CSK are at second spot with 16 points from the same number of matches.

Rayudu and Watson gave scant respect to the Sunrisers bowlers, touted as the best in this IPL, as they were rarely troubled by the bowling attack which had the likes of India pacer Bhuvneshwar Kumar and highly-rated Afghan leg-spinner Rashid Khan.

Bhuvneshwar had another rare poor day in office, after the treatment he got from Delhi Daredevils' Rishabh Pant, as he leaked 38 runs from his four overs without any success.

Rashid went wicketless and conceded 25 runs while Bangladeshi left-arm spinner Shakib Al Hasan was hit for 41 runs for no success. Medium pacer Siddharth Kaul leaked 40 runs from his three overs as the Sunrisers bowlers had a rare collective off day today.

CSK made a flier of a run chase, scoring 53 for no loss in the powerplay overs with Rayudu hitting Bhuvneshwar for two sixes during that period and Watson doing the dame to Sandeep Sharma (1/36).

By the halfway mark, CSK had galloped to 93 for no loss. The quick dismissal of Watson and Suresh Raina (2) gave a brief hope for the Sunrisers but Rayudu continued in the same vein of six-hitting spree while Dhoni gave him company till the end to ensure there were no hiccups in the chase.

Earlier, opening batsman Shikhar Dhawan and captain Kane Williamson continued their top form this season as the two batsmen struck fluent half centuries to take Sunrisers to 179 for 4 after being sent in to bat.

Dhawan and Williamson continued from what they had left in their last match in Delhi as the duo yet again scored the bulk of Sunrisers runs with a 123-run stand for the second wicket.

The Sunrisers were slow to start off with just 29 runs in the powerplay overs and also lost the wicket of opener Alex Hales (2), mainly due to a fine spell of bowling by medium pacer Deepak Chahar who opened the bowling and had figures of 4-0-16-1.

Even experienced players Dhawan and Williamson found it difficult to score off Chahar.

At the halfway stage, the Sunrisers were 62 for 1 and with wickets, in hand, they shifted gears in the second half of their innings to add 115 runs in the last 10 overs.

Ravindra Jadeja and Harbhajan Singh bore the brunt as they were given some treatment by Dhawan and Williamson who hit a few fours and sixes off them. Harbhajan gave way 26 runs from his two overs, while Jadeja leaked 24 from the same number of overs.

Dhawan andWilliamson then rained in fours and sixes as they added 68 runs in five overs after the halfway stage to take their side to 130 for one at the end of the 15th over. The duo, however, departed in quick succession to give a twist to the match.

With the departure of the two set batsmen, the tempo slowed down. Manish Pandey continued with his poor form as he got out for 5 in the 19th over as the Sunrisers added 49 runs from the final five overs.

Comments
Topics mentioned in this article
Chennai Super Kings Sunrisers Hyderabad Indian Premier League 2018 Ambati Rayudu Shane Watson Cricket
Get the latest updates on IND vs NZ 2021, check out the Schedule and Live Score . Like us on Facebook or follow us on Twitter for more sports updates. You can also download the NDTV Cricket app for Android or iOS.