IPL SunRisers Hyderabad vs Kings XI Punjab highlights: Kings XI Punjab batsmen crumbled like a pack of cards to fall short eventually and slump to their second loss in the tournament. 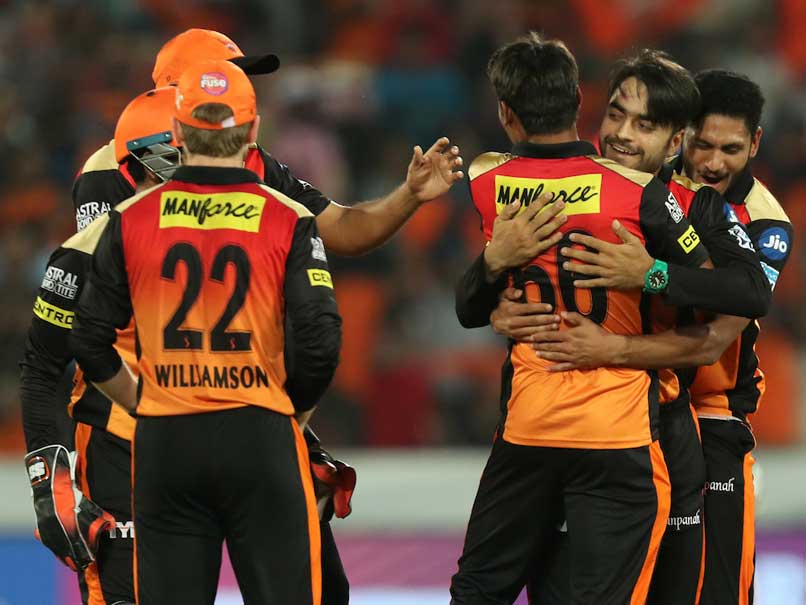 SRH vs KXIP Highlights: SRH kicked-off their campaign with three wins on the trot.© BCCI

Riding on wonder spinner Rashid Khan's brilliant effort, SunRisers Hyderabad produced an inspired bowling display to eke out a fighting 13-run win over in-form Kings XI Punjab in a low-scoring Indian Premier League (IPL) match on Thursday. Rashid (3/19) turned out to be the star for SunRisers once again as he along with Shakib (2/18) turned the tables around for the hosts in the middle overs after Manish Pandey's fighting 54 propelled them to 132 for six. Besides Rashid and Shakib, Basil Thampi (2/14) and Sandeep Sharma (2/17) also rose to the occasion for the home team. Earlier, young Kings XI pacer Ankit Rajpoot (5/14) registered his career-best bowling figures to restrict SunRisers to the modest score. But the total proved enough for SunRisers as Kings XI batsmen crumbled like a pack of cards to fall short eventually and slump to their second loss in the tournament. Chasing the modest target, openers KL Rahul (32) and Chris Gayle (23) got Kings XI's off to great start as the duo stitched quick 55 runs in just 47 balls. But just when it looked Kings XI will run away with the game, Afghan leg-spinner Rashid got the big breakthrough when he cleaned up Rahul with a gem of a delivery. Big-hitting Gayle then miscued a short delivery off Thampi in the next over and the pacer accepted the chance of his own bowling. The two wickets derailed Kings XI's chase as Rashid and Shakib bowled brilliantly in the middle overs to keep SunRisers afloat with wickets at regular intervals. Rashid, in particular, was unplayable as the Kings XI batsmen completely failed to read his variations.

Sunrisers Hyderabad failed to recover from the early blows from medium pacer Ankit Rajpoot (5/14) as Kings XI Punjab restricted the hosts to a paltry 132/6 in an Indian Premier League (IPL) match at the Rajiv Gandhi International Stadium. Ankit ran through the home batting line-up bagging the key wickets of skipper Kane Williamson (0), Shikhar Dhawan (11) and Wriddhiman Saha (6) off his first three overs before returning to pick Manish Pandey (54) and Mohammad Nabi (4) in the final over of the innings. Put in to bat, the hosts were saved from the blushes by Pandey's fighting 51-ball knock, laced with three fours and a six after Rajpoot reduced them to 27/3 in the first five overs. Rajpoot had almost jolted the hosts with the wicket of Shakib Al Hasan (28 off 29 balls; 4x3) on the very next ball only if Andrew Tye hadn't missed a dolly at mid-wicket. Shakib once again got a reprieve in the next over from left-armer Barinder Sran, who induced a thick edge off to third man, only for the umpires to call it a front foot no-ball. With the hosts finding themselves at a precarious 27/3, Shakib and Manish Pandey survived a few close calls, including a run-out attempt, to take the Sunrisers' to 57/3 midway into the innings. Take a look at the NDTV Fantasy section. You can Play Fantasy Cricket here.

Ravichandran Ashwin's ploy to employ part-timer Manoj Tiwary misfired as the leg-spinner leaked 10 runs from his only over, forcing the Punjab skipper to bring his 17-year-old mystery spinner Mujeeb Ur Rahman into the attack. Mujeeb responded in style by ending the 52-run fourth wicket stand, when he induced the Bangladeshi skipper with a wrong 'un to be comfortably caught by Mayank Agarwal at the mid-wicket fence. Shakib's dismissal brought in the experienced Yusuf Pathan (21 not out off 19; 4x1, 6x1) who was forced to curb his naturally aggressive approach by the Punjab bowlers, even as the home side managed to reach the three figures in 16.3 overs. Sensing emergency, Manish tried to change gears and got a life on 46 when he was dropped at deep mid-wicket by Mayank off Tye. Manish managed to take advantage of the life by sending Tye's slower one to the extra cover boundary and raise the second joint slowest 50 for the Sunrisers but the joy was short-lived as the right-hander fell prey to Rajpoot in the final over of the innings. Afghan all-rounder Nabi then joined Pathan for the final two deliveries but couldn't trouble the scorers much as Rajpoot had the last laugh to end the innings at 132. (SCORECARD)

22:47 IST: 50th IPL wicket for Shakib Al Hasan. Mayank Agarwal came forward, out of his crease, and yet he still couldn't get near the ball.

22:35 IST: It was a bouncer and Gayle played a pull shot. Top edge straight up and Basil Thampi took the catch himself somewhere around short leg.

22:28 IST: KL Rahul covered his stumps and came forward. He looked to defend the good-length legbreak as it took the outside edge and rattled his stumps.

22:00 IST: First SIX of KXIP innings comes off Chris Gayle's bat. He came dancing down the ground before lifting it over Nabi.

21:50 IST: KL Rahul and Chris Gayle walk out to bat for KXIP. Sandeep Sharma opens the attack for SRH

21:33 IST: What a performance from Ankit Rajpoot. Finishes with career-best figures of 5 for 14.

21:09 IST: Another exceptional over from Mujeeb Ur Rahman, just 2 runs off it. The young Afghanistan bowler finishes his quota of 4 overs with figures 4-0-17-1.

21:06 IST: The first maximum of SRH's innings came in the 15 over off Manish Pandey's bat. It was right in the slot outside off and Pandey sent it over the midwicket for a SIX.

21:03 IST: Mujeeb Ur Rahman breaks the 52-run stand between Shakib Al Hasan and Manish Pandey. Shakib went for a slog, mistimed it and was caught at deep midwicket.

21:00 IST: Finally a boundary after 6 overs for SRH. Shakib walked across and pulled a slow, short ball away to the long leg boundary.

20:56 IST: Mujeeb Ur Rahman is not giving any chances to the batsmen to score freely.

20:52 IST: Andrew Tye gives away just 4 runs in his first over. Excellent performance from KXIP bowlers.

20:48 IST: Excellent first over from Mujeeb Ur Rahman, just 3 runs off it.

20:35 IST: The body language of SRH batsmen looks a bit odd today. They have been jolted by three massive wickets. Now, Manish Pandey and Shakib Al Hasan will have to bat deep to take SRH to a competitive score.

20:30 IST: Sran gets Shakib Al Hasan caught at the third man but it turns out to be a no-ball. Too much happening in Hyderabad.

20:25 IST: Wicket number 3 for Rajpoot. Saha played a clumsy slog and got a top edge.

20:18 IST: Manish Pandey dropped on 2 by R Ashwin, who tried to take a catch while running back from mid-off. Not a good cricket from SRH batsmen inside the Powerplay overs.

20:12 IST: Now Shikhar Dhawan gets beaten by the bounce. He squared up and ended up offering the outside edge to Karun Nair at slip.

20:08 IST: The first boundary of SRH innings came off Shikhar Dhawan's bat in the form of a cover point boundary.

The ball was pitching short and Williamson though he could play a pull shot, Mistimed it and R Ashwin caught it at mid-off.

20:00 IST: Shikhar Dhawan and Kane Williamson walk out to bat for SRH. Ankit Rajpoot to open the attack for KXIP

In the bowling department, all-rounder Ravichandran Ashwin, along with Mohit Sharma add depth to the line-up. Also, medium pacers Barinder Sran, Andrew Tye and Afghan spinner Mujeeb ur Rahman shoulder the bowling responsibility. On the other hand, Sunrisers have their tails up after defending a paltry 118 against Mumbai Indians on Tuesday. The Sunrisers' bowlers dished out a superb performance to trigger a batting collapse of Mumbai and eventually defend the total by 31 runs at the packed Wankhede Stadium. Earlier, the Kane Williamson-led side kicked-off their campaign in an impressive way with three wins on the trot but later suffered successive defeats to Kings XI Punjab and Chennai Super Kings. Williamson has been in good touch and has carried the batting on his shoulders. The New Zealand batter has amassed 259 runs from six games. However, Shikhar Dhawan and Wridhiman Saha, have not given the required support to Hyderabad's batting. Saha has been below par with the bat with just 62 runs while Dhawan has been a bit better with 135 runs from five innings. Yusuf Pathan had shown glimpses of his old attacking batting against Rajasthan Royals with a quick 27-ball 45 but failed to repeat the show against Mumbai. Hyderabad's strength mostly relies on their bowlers, who didn't let Bhuvneshwar Kumar's absence be felt in the game against the Rohit Sharma-led side.

Kings XI Punjab (KXIP) and Sunrisers Hyderabad (SRH) will be aiming to outsmart each other and continue their winning run when they face-off in an Indian Premier League (IPL) tie at the Rajiv Gandhi International Stadium in Hyderabad on Thursday. A rampant Punjab has won five of its six league games while Hyderabad have managed to carve out four victories from six games, standing third in the league points-table. Punjab openers Lokesh Rahul and Chris Gayle have been a major reason behind their success. While Rahul has accumulated 236 runs from six games, the Caribbean self-proclaimed "Universe Boss" has amassed 229 runs from just three matches. Gayle, however, missed the previous match against Delhi Daredevils due to fitness issues and his absence was clearly felt in Punjab's opening. If the 38-year-old returns for Thursday's game, it will again be a threat to the opponent's bowling. Karun Nair has also been impressive after 173 runs from five innings but veteran Yuvraj Singh, Aaron Finch, and Mayank Agarwal are yet to make their presence felt in the middle. The trio's poor form could be a cause of concern for the team management, keeping in view Hyderabad's decent bowling attack.

Bhuvneshwar has scalped six wickets from four games, with an economy under seven. Spinners Shakib Al Hasan and Rashid Khan have also bagged six wickets each from as many games while medium pacer Siddarth Kaul has been the most impressive with nine wickets from six games. Another medium pacer Basil Thampi, who featured in just a game for Hyderabad, came out with a clinical show against Mumbai. The 24-year-old picked two wickets conceding just four runs from 1.5 overs. However, pacer Billy Stanlake, who has been in good touch in the ongoing edition with five wickets from four games, has been ruled out of the remaining season after a fracture in his finger. Overall, it will be Punjab's batting versus Hyderabad's bowling when the two sides square-off on Thursday.

When will the SunRisers Hyderabad vs Kings XI Punjab match be played?

The SunRisers Hyderabad vs Kings XI Punjab match will be played on April 26, 2018.

Where will the SunRisers Hyderabad vs Kings XI Punjab match be played?

The SunRisers Hyderabad vs Kings XI Punjab match will be played at the Rajiv Gandhi International Cricket Stadium, Hyderabad.

How do I watch the SunRisers Hyderabad vs Kings XI Punjab match live?

The SunRisers Hyderabad vs Kings XI Punjab match will be telecast live by the Star Network.

The live telecast of the SunRisers Hyderabad vs Kings XI Punjab match will begin at 8 pm IST.

Where can you follow the SunRisers Hyderabad vs Kings XI Punjab match online?

The SunRisers Hyderabad vs Kings XI Punjab match will be streamed live on Hotstar. For live updates, you can follow sports.ndtv.com.