SunRisers Hyderabad made it to the IPL 2018 playoffs with 18 points under their belt, while Delhi Daredevils with just six points from 11 games have been eliminated from the tournament 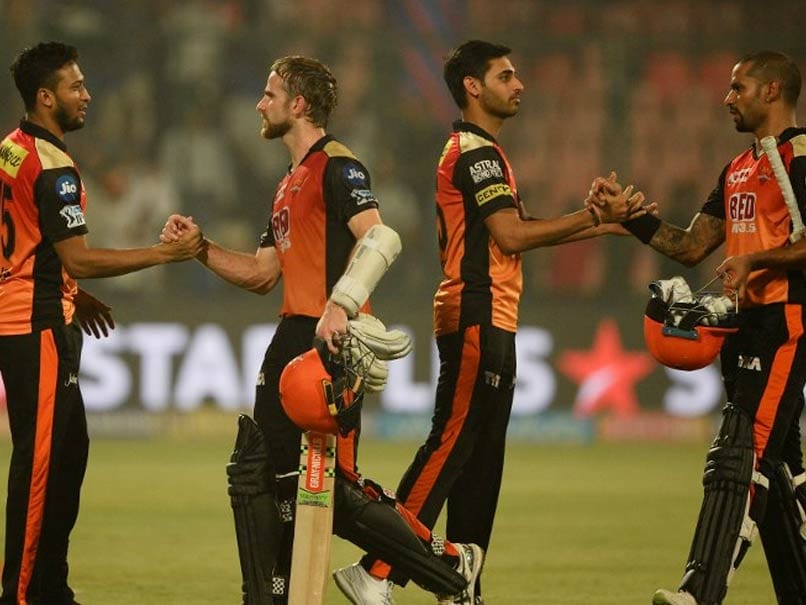 Shikhar Dhawan and Kane Williamson shared an unbeaten 176-run stand to overshadow a breathtaking hundred from Rishabh Pant as SunRisers Hyderabad cruised into the Indian Premier League (IPL) play-offs with a commanding nine-wicket victory over Delhi Daredevils at the Feroz Shah Kotla on Thursday night. Delhi's 187 for five was a challenging target but Dhawan (92 not out off 50 balls) and captain Williamson (83 not out off 53) ensured SunRisers overhaul the total in 18.5 overs. The experienced duo was a delight to watch as it completed the chase with utmost calm.

Like a boss, the #SRH are sitting atop the #VIVOIPL Points Table after Match 42 pic.twitter.com/eL6RsdRCnr

SunRisers' brilliant performance came after Pant's maiden IPL hundred, a wonderful 128 not out off 63 balls which was not enough to arrest his team's slide. With just six points from 11 games, Delhi are now certain to make another early exit from the tournament.

SunRisers, who lead the table with 18 points from 11 games, showed tonight that they could not just defend small totals but also chase down stiff targets. Dhawan, due for a big score, rose to the occasion with a sublime innings that was laced with nine boundaries and four sixes. Williamson was not far behind as he breezed to his sixth fifty-plus score of the competition. Earlier, Pant helped the Daredevils overcome a poor start to reach an imposing total.

Pant was unstoppable in his unbeaten knock as he toyed with arguably the best bowling attack in the competition, single-handedly giving a fighting chance to a struggling Delhi. His special knock comprising 15 fours and seven sixes also more than made up for his involvement in run-outs of captain Shreyas Iyer (3 off 7) and a set Hasrshal Patel (24 off 17). Delhi decided to put scoreboard pressure on the opposition by deciding to bat but things did not go according to plan in the powerplay.

Shakib Al Hasan struck off consecutive balls in the fourth over to remove in-form opener Prithvi Shaw (9) and Englishman Jason Roy (11), leaving Delhi at 21 for two. Shaw mistimed a pull off a short ball and Dhawan latched on to it at cover.

Shakib sent back Roy the very next ball with a beauty that turned away just enough to take the edge to the wicket-keeper. Pant released the pressure with a hat-trick of boundaries against Siddharth Kaul in the sixth over before doing the same to lead spinner Rashin Khan in the 12th over.

Delhi had crawled to 52 for three in 10 overs but Pant's power hitting quickly changed the course of the game. He reached the 50-run mark with his trademark hit, a six over midwicket off Shakib. He got to the 100 in a similar fashion, muscling a full toss from Kaul over midwicket. The way Pant took on the likes of Shakib, Kaul and Bhuvenshwar Kumar was commendable.

The left-hander was also at his innovative best as he used the scoop shot over third man not once but thrice. Two of those scoops were in the final over bowled by Bhuvneshwar who proved to be the most expensive bowler for SunRisers, leaking 51 runs in four overs. It was a rare off day for the usually accurate India pacer.

The 29th over saw Pant dispatching Bhuvneshwar for three consecutive sixes, including a one handed hit that sailed over long-on.

Thanks to Pant, Delhi amassed 135 runs in the last 10 overs. Pacer Kaul too had a forgettable outing as he conceded 48 runs off his four overs.

Comments
Topics mentioned in this article
Sunrisers Hyderabad Delhi Daredevils Shikhar Dhawan Kane Williamson Indian Premier League 2018 Cricket
Get the latest updates on IPL 2020, check out the IPL Schedule for 2020 and Indian Premier League (IPL) Cricket live score . Like us on Facebook or follow us on Twitter for more sports updates. You can also download the NDTV Cricket app for Android or iOS.