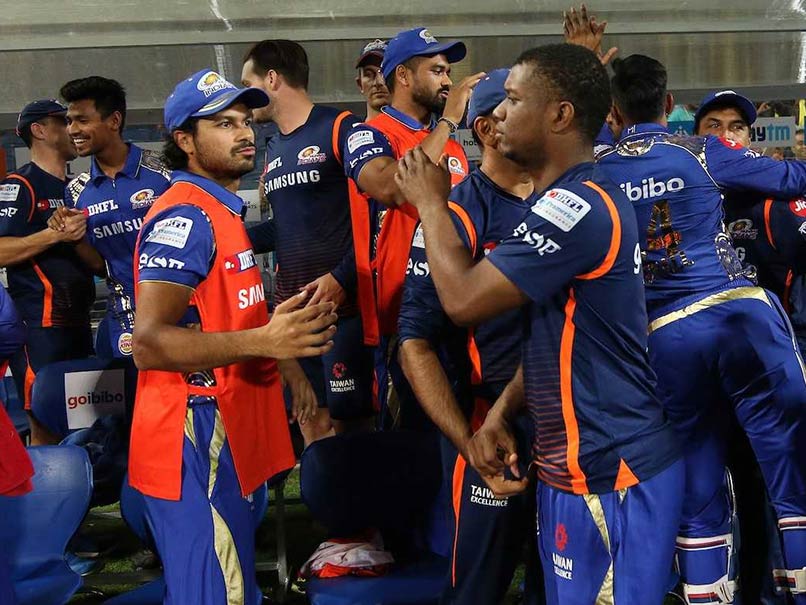 Mumbai Indians (MI) kept their hopes alive of reaching the playoffs by beating table-toppers Chennai Super Kings (CSK) by eight wickets at the Maharashtra Cricket Association Stadium in Pune on Saturday night. The win was crucial for Rohit Sharma's team and the captain led from the front with an unbeaten 56 off 33 balls. The defending champions have had a torrid time this season and this win -- only their second of IPL 2018 -- will come as a massive relief. Following the win, Mumbai players were seen enjoying a cake smash session with Ishan Kishan seemingly the provocateur-in-chief in the revelry.

New Zealand pacer Mitchell McClenaghan, though, produced the moment of the celebration when he himself dunked his face in the cake.

Ishan Kishan was seen throwing cake around on his teammates with Suryakumar Yadav on the receiving end of most of the barrage.

However, the win didn't come easy for Mumbai Indians as they huffed and puffed in the chase.

Mumbai Indians restricted Chennai Super Kings to 169 for five, mainly built around Suresh Raina's unbeaten 75-run innings. McClenaghan was the pick of the Mumbai bowlers, picking up two for 26 in his four overs.

In reply, Mumbai got a dream start with Evin Lewis and Suryakumar taking the score to 50 for no loss in the first six overs. However, after the powerplay, both players struggled to find the boundary consistently with Suryakumar faring a little better than his opening partner in that aspect.

Rohit, who has not had the best of times this season, gave Mumbai the much-needed impetus even as Lewis struggled.

Rohit shared 59 runs with Lewis for the second wicket before adding another 42 off 21 balls with Hardik Pandya to take the team home.

In the end, Mumbai got over the line with only two balls to spare.

Comments
Topics mentioned in this article
Mumbai Indians Chennai Super Kings Ishan Kishan Suryakumar Yadav Mitchell McClenaghan Rohit Sharma Indian Premier League 2018 Cricket
Get the latest updates on IPL Auction 2023 and check out  IPL 2023 and Live Cricket Score. Like us on Facebook or follow us on Twitter for more sports updates. You can also download the NDTV Cricket app for Android or iOS.