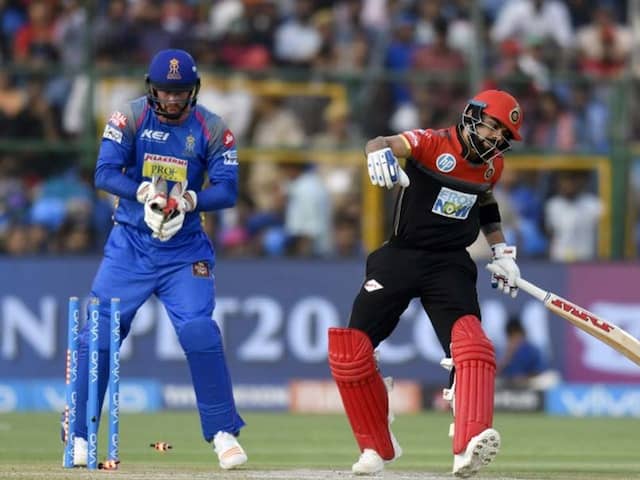 Rajasthan Royals outclassed Virat Kohli-led Royal Challengers Bangalore (RCB) by 30 runs at the Sawai Mansingh Stadium in Jaipur to keep themselves in the hunt for a place in the Indian Premier League (IPL) Play-offs. With this win, Ajinkya Rahane's side jumped to the fourth spot in the IPL tally with 14 points. The star of the match was Shreyas Gopal who ripped through the RCB top order and claimed 4 for 16 in his allotted 4 overs.

Kohli danced down the track to play Gowtham but got beaten by bowler's inward spin. The ball went through and rattled Kohli's stumps. Kohli scored just 4 runs before being dismissed by the Rajasthan Royals' spinner.

After dismissing Kohli, Gowtham punched the air and said "boom!" in celebration.

Gowtham was included in India A squad for one-day series against England Lions and West Indies A.

Despite the absence of their two key overseas players in England's Jos Buttler and Ben Stokes, who have left for national duty, Ajinkya Rahane and Co. put on a magnificent show.

Kohli is the highest run-getter for RCB this season. The skipper has played 14 matches in tournament, scoring 530 runs at an average of 48.18. He has four half-centuries to his name in IPL 2018.

Comments
Topics mentioned in this article
Royal Challengers Bangalore Rajasthan Royals Virat Kohli Krishnappa Gowtham Indian Premier League 2018 Cricket
Get the latest Cricket news, check out the India cricket schedule, Cricket live score . Like us on Facebook or follow us on Twitter for more sports updates. You can also download the NDTV Cricket app for Android or iOS.