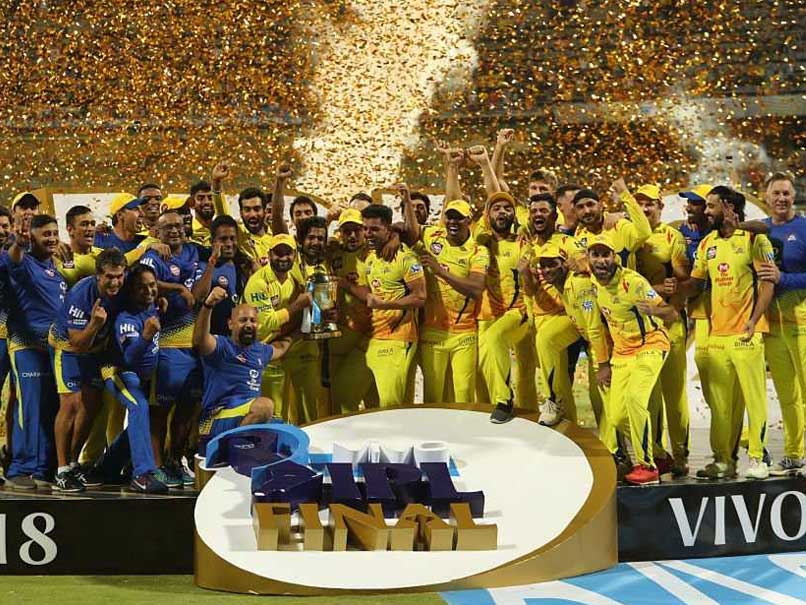 Shane Watson smashed an unbeaten 117 off just 57 balls to power Chennai Super Kings to a eight-wicket win over SunRisers Hyderabad in the IPL 2018 final at the Wankhede Stadium on Sunday night. This was CSK's third IPL title and came rather easily against SRH -- a team that finished top of the standings after the league stage. The Australian all-rounder started his innings sluggishly with 10 dot balls but upped the ante after the powerplay. Captain Kane Williamson (47) and Yusuf Pathan (45 not out) had helped SRH post a competitive 178 for six but it proved no match for CSK as the MS Dhoni-led team overhauled the target with nine balls to spare.

Watson hit 11 fours and eight sixes during his unbeaten knock but things didn't start well for him as SRH pacer Bhuvneshwar Kumar kept him under wraps for much of the powerplay.

However, a couple of big hits off the bowling of Sandeep Sharma got the Australian going and there was no looking back for him after that.

CSK's chase had gotten off to a poor start with South African batsman Faf du Plessis falling in the fourth over with the score on 16.

Watson and Raina got together and went about dismantling the SRH bowling in ruthless fashion. The duo strung together a match-winning 117-run stand for the second wicket with SRH bowlers helpess in front of the CSK pair's onslaught.

Not just power hitting, Watson and Raina played some smart cricket by being cautious against SRH's trump card Rashid Khan. There were no risks taken against the Afghan sensation and the leg-spinner returned wicketless, going for 24 runs in his four overs.

Raina fell to Carlos Brathwaite but by that time the damage had been done. Ambati Rayudu (16 not out) added the finishing touches to CSK's win with some lusty blows in the end.

Owing to his whirlwind ton at the Wankhede, Watson became the second player after Wriddhiman Saha to score a century in an IPL final. Saha, playing for Kings XI Punjab, had achieved the feat against Kolkata Knight Riders in the IPL final in 2014.

Earlier, Williamson missed out on yet another fifty in a highly successful season as Sunrisers Hyderabad piled on a challenging score after a slow start.
Williamson led his side from the front once again hitting two sixes and five fours in his innings before Pathan pummelled the opposition bowlers in the death overs. Carlos Brathwaite (21 off 11) came up with the much-needed big hits towards the end to take his team close to 180.

CSK kept a tight rein on the SunRisers Hyderabad batsmen initially while also taking a wicket through a run-out. The first four overs saw only one boundary being hit, a turn to fine leg for four by Dhawan off Lungi Ngidi.

Deepak Chahar, who was bowling well till then, dug in one short to Williamson in the fifth over who smacked it for a six over long leg and then was pulled for a four by the New Zealander.

And when Shardul Thakur too erred in length, he was hoisted over long on by Dhawan for a maximum, taking SRH to 42 for 1 by the end of powerplay.

The second wicket partnership reached the 50-mark when it was snapped by Ravindra Jadeja who bowled Dhawan when the left-handed opener missed a heave on the 25th ball he faced.

The run-rate dropped a bit after his departure and at the half-way mark Sunrisers were 73 for 2.

The promoted Shakib Al Hasan hit the accurate Jadeja for a six and a four to the mid-wicket region after Williamson's leading edge ran away to the boundary so that 17 runs were taken off the left-arm spinner in the 11th over to boost the run rate.

The Sunrisers captain, by far his side's major run-getter who also became the third highest scorer in one IPL season, went back after striking two sixes and five fours to leave his side at 101 for 3.

Yusuf Pathan started in aggressive fashion and put on a useful stand of 32 with Shakib before the latter drove Bravo straight to Raina at extra cover and was caught.

It was later left to Pathan and big-hitting West Indian Brathwaite to give the total a big boost in the death overs as they added 34 runs in the last three overs.

Comments
Topics mentioned in this article
Chennai Super Kings Sunrisers Hyderabad Shane Watson Kane Williamson MS Dhoni Indian Premier League 2018 Chennai Super Kings vs Sunrisers Hyderabad, Final Cricket
Get the latest updates on IND vs NZ 2021, check out the Schedule and Live Score . Like us on Facebook or follow us on Twitter for more sports updates. You can also download the NDTV Cricket app for Android or iOS.