Kings XI are currently lying at the fifth spot with 10 points from 11 games and cannot afford to slip a bit in their remaining three games to stay in the fray. 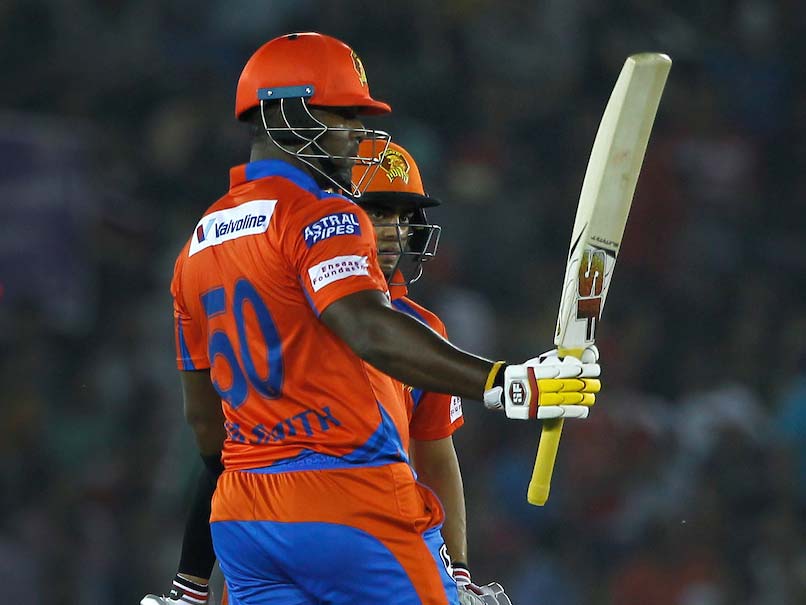 Already out of the reckoning, Gujarat Lions severely dented Kings XI Punjab's play-off chances with a comfortable six wicket win in an Indian Premier League game in Mohali on Sunday. Dwayne Smith turned out to be the architect of the victory for Gujarat with a quick-fire 74 off 39 deliveries to get the visitors off to a flier while chasing a challenging 190 for win. Suresh Raina, winning the toss, elected to bat against KXIP. Opening for Punjab, Hashim Amla played a brilliant knock to bring up his second century of IPL 2017 and power KXIP to a challenging 189 for three.

In his innings, Smith struck eight boundaries and four huge sixes. Chasing the target, Gujarat rode on Smith's brisk batting to race to 91 for no loss inside 10 overs. Smith was at his best as he dealt mostly in boundaries and sixes. Together with Ishan Kishan (29 off 24 balls), Smith shared 91 runs for the opening partnership to lay the foundation for the chase.

Shaun Marsh supported Amla with a well made 58 off 43 balls. Scoring his second century, Amla, became the second batsman after Virat Kohli to register two centuries in a single IPL season. Towards the end, skipper Glenn Maxwell remained unbeaten on 20 off 11 balls.

From here on, it will be a Herculean task for Kings XI to qualify for the play-offs as they not only will have to win their remaining three games but their fate will also depend on the outcome of other games.

Kings XI are currently lying at the fifth spot with 10 points from 11 games and cannot afford to slip a bit in their remaining three game to stay in the fray.

Chasing the target, Smith rode on his luck as David Miller dropped him on 42. Smith cashed in on the chance as he milked the Kings XI bowling attacking with consummate ease to keep Gujarat in the hunt. Smith brought up his half-century with a six off Axar Patel in the final delivery of the seventh over. As for Punjab, they displayed poor fielding performance.

Smith was handed another lifeline in the eighth over when a diving Gurkeerat Singh spilled a chance off the bowling off skipper Glenn Maxwell. Kings XI finally tasted success in the 10th over when Kishan was holed out at deep midwicket by Miller off T Natarajan's bowling.

Looking in a hurry to finish off the chase, Smith's luck finally ran out when he was holed out by Martin Guptill at deep midwicket off Maxwell in the 12th over.

Skipper Suresh Raina (39 off 25) and Dinesh Karthik (35 not out off 23) then added crucial 42 runs for the third wicket to keep Gujarat afloat. With the equation down to 24 off the last two overs, Karthik used his experience to great effect to guide Gujarat home, reaching 192 for four in 19.4 overs.

Earlier sent into bat, Kings XI lost Guptill in the fifth delivery of the innings, caught by Basil Thampi of Pradeep Sangwan (1/28) as the batsman top-edged a short delivery.

The early fall of wicket had an impact on Kings XI as the hosts found the going tough initially and the first four overs just yielded 21 runs. But a stroke of luck for Amla suddenly changed the script for Kings XI as Ravindra Jadeja dropped a difficult chance at backward point off the bowling of Thampi.

Thereafter, it was a complete Amla and Marsh show as the duo got into the attacking mode after the initial silence to take Kings XI forward against Gujarat's inexperienced bowling attack.

The duo struck boundaries at will as the notched up their 100-run stand for the second wicket in the 13th over. Amla brought up his fifty off 35 balls with the help of four boundaries and one six, while Marsh's half century came off 37 balls during which he struck five fours.

Dhawal Kulkarni (1/24) finally broke the partnership, dismissing Marsh in the 16th over caught at long-on by Finch. But Amla continued his onslaught and cleared Kulkarni over the long-on for his third six of the match. Amla brought up his century in style as he creamed Thampi over cover boundary for a flat six. But he departed in the very next ball, LBW to Thampi as he missed a yorker.

(With Inputs From PTI)

Comments
Topics mentioned in this article
Kings XI Punjab Gujarat Lions Glenn Maxwell Suresh Raina Dwayne Smith Hashim Amla IPL 2017 Cricket
Get the latest updates on Fifa Worldcup 2022 and check out  Fifa World Cup Schedule, Stats and Live Cricket Score. Like us on Facebook or follow us on Twitter for more sports updates. You can also download the NDTV Cricket app for Android or iOS.