Mumbai Indians won the thrilling final by just one run to lift their third IPL title. 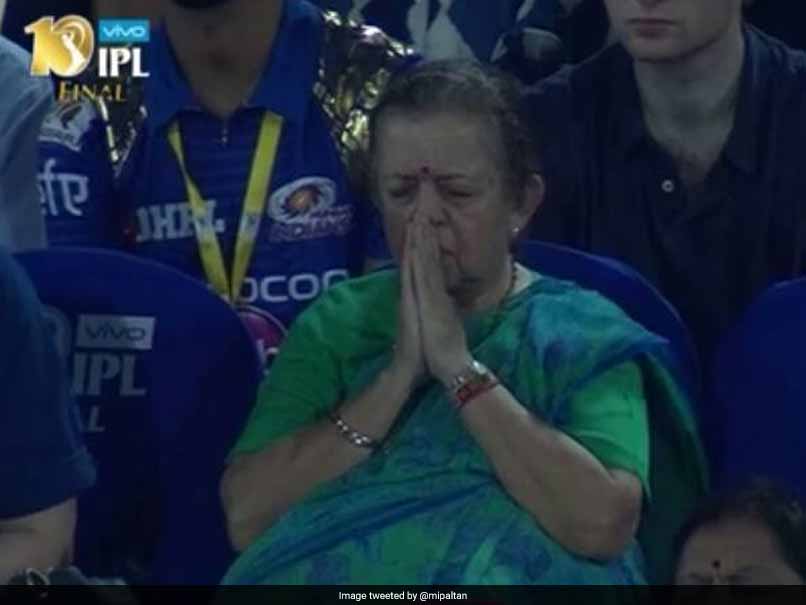 Magnificent death bowling saw Mumbai Indians clinch an incredible one-run victory against Rising Pune Supergiant in a thrilling Indian Premier League final at the Rajiv Gandhi International Stadium on Sunday. The game was indeed the closest final in the history of the tournament.

The match was heading towards a tense finish when 7 runs were needed off 4 balls and it looked like RPS will clinch their maiden title. That was the moment when the camera was panned towards an 'aunty' who was seen lost in prayer in the Mumbai Indians' stand.

Within minutes her photo went viral and Twitterati named her 'Prayer Aunty'.

Finally, Mumbai won the thrilling final by just one run and lifted their third IPL trophy. Bollywood star Abhishek Bachchan took to micro-blogging site Twitter to reveal the identity of the 'Prayer aunty'.

"That is Mrs. Ambani's mother. Popularly referred to as "nani". The lucky charm," junior Bachchan wrote on his Twitter handle.

@BuzzFeedIndia That is Mrs. Ambani's mother. Popularly referred to as "nani". The lucky charm.

This was MI's third IPL trophy in 10 editions and even more special for their skipper Rohit Sharma, who is the only captain to have won a hat-trick of titles. Rohit has in fact now won four IPL titles (one for Deccan Chargers in 2009).

Certified Mumbai Indians fan and Mrs. Nita Ambani's mother, Purnimaben Dalal did all she could to bring the IPL trophy home. #ThankYouNani pic.twitter.com/SIlxdMDOaL

Australian fast bowler Mitchell Johnson was the most successful bowler for Mumbai with figures of 3/26, while young pacer Jasprit Bumrah also played a crucial role, returning with figures of 26/2 in his four overs.

For Mahendra Singh Dhoni, it was yet another final that ended in a defeat -- fifth in seven summit clashes.

Comments
Topics mentioned in this article
Rising Pune Supergiant Mumbai Indians Rohit Sharma Rajiv Gandhi International Stadium, Hyderabad IPL 2017 Cricket
Get the latest updates on ICC Women's Cricket World Cup 2022 and IPL 2022, check out the Schedule , Live Score and IPL Points Table. Like us on Facebook or follow us on Twitter for more sports updates. You can also download the NDTV Cricket app for Android or iOS.