A gritty half-century from Marcus Stoinis followed by three crucial wickets with the ball proved to be the X-Factor in Kings XI Punjab's nine-run win over Delhi Daredevils at Mohali. Catch all the highlights of this match here.

After being put in to bat, Kings XI Punjab got off to a good start as their skipper Murali Vijay and Marcus Stoinis added 45 runs for the first wicket. Delhi Daredevils then got rid off Vijay and Hashim Amla in quick succession to pull things back. But Stoinis and Wriddhiman Saha played sensibly and got to their fifties as the hosts finished their innings on 181/5. In reply, Quinton de Kock and Sanju Samson played good knocks for tourists but it didn't prove enough as some tight bowling from Stoinis and other bowlers towards the end helped Punjab seal their third win of the season. Get all the highlights of this match here. (SCORECARD | POINTS TABLE | STREAMING | NEWS | PLAY FANTASY LEAGUE).

23:58 hrs IST:That's it. Thank you for joining us today. See you all tomorrow for the 4pm game between Mumbai Indians and Sunrisers Hyderabad. Until then, it's goodbye. Cheers!Â

Marcus Stoinis (Man of the Match):"The beauty about somebody going hard at you is that you have a chance to take wickets. We will have to keep preparing and keep training."

Murali Vijay (KXIP skipper):"We badly wanted this win. I can't ask more than this because they gave it everything. We said 170 was par and we got 10 runs extra. There was dew factor but amazing bowling from the bowlers. I just told them to keep believing in their skills and not think about the batsmen."

Zaheer Khan (DD skipper): "It was a good game. 180 was just about par and I thought we had it under control. The ball was reversing and good death-bowling I would say. It is a big ground and few errors on the field are bound to happen. Overall, I felt the wicket was playing well." Exceptional death bowling. We are proud of you, Mohit Sharma! This is what we call as - TOP CLASS STUFF! #KXIPvDD

23:27 hrs IST: SIX!That's a humongous hit from Brathwaite over mid-wicket.Â

23:26 hrs IST: FOUR!Fuller delivery from Sandeep and Brathwaite clobbers it in the gap between deep mid-wicket and long-on.Â 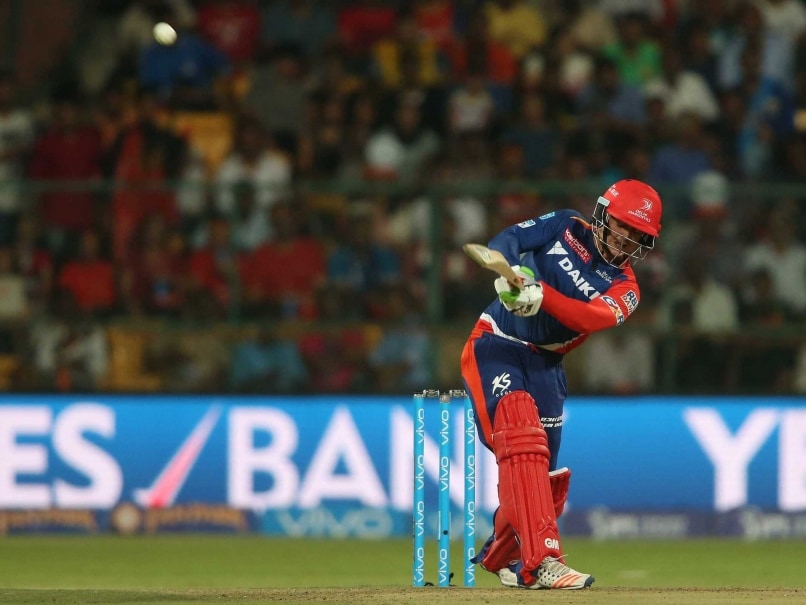 22:59 hrs IST: FOUR!Slower ball from Stoinis, Samson steps out just a little and pulls it well to deep mid-wicket.Â

22:44 hrs IST: FOUR!Seam-up delivery from Cariappa and Samson times it well in the gap between long-on and deep mid-wicket.DD now require 91 off 60 balls.Â

22:42 hrs IST: SIX!Samson comes down the track to Cariappa and strikes it well over long-off.Â

22:30 hrs IST: SIX!Short ball from Stoinis and de Kock murders it into deep mid-wicket stands.Fifty for de Kock. His 4th in IPL.Â

22:27 hrs IST: FOUR!Overpitched delivery from Cariappa and de Kock sweeps it past the fielder at deep backward square leg.Â

2 in 2 for the left hander, four more! @QuinnyDeKock69 is on a roll. Hard to stop him when he bats like this. #DilDilli #KXIPvDD

22:12 hrs IST: FOUR!Slower delivery from Mohit and de Kock hits it well over extra cover fielder for his second boundary.Â

22:05 hrs IST: FOUR!Length delivery from Mohit and Samson just muscles it past the fielder at mid-on.DD are 10/0 after 2 overs.Â

21:34 hrs IST: SIX!Shortish delivery from Shami and Axar pulls it over backward square leg for a maximum.KXIP are 168/5 after 19 overs.Â

21:32 hrs IST: FOUR!Length ball from Shami, outside off, Miller gets into position and clobbers it over the covers for his first boundary.Â 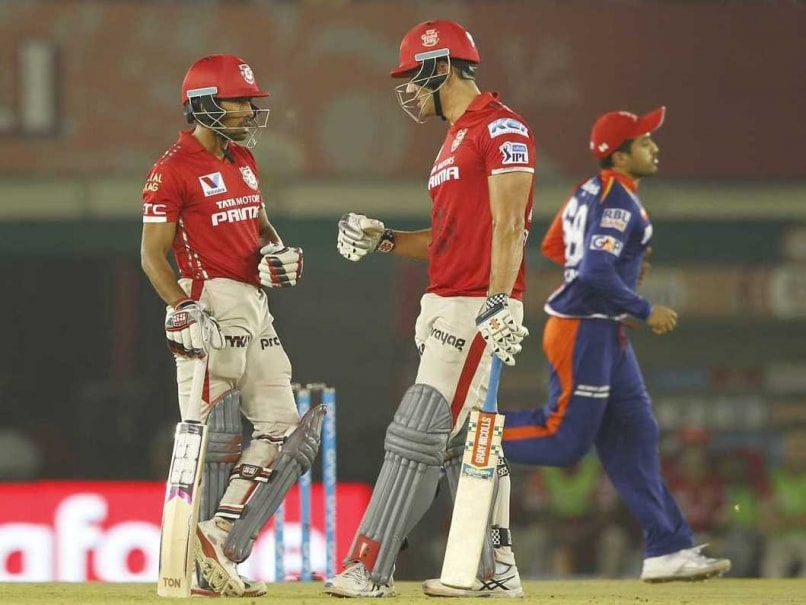 21:19 hrs IST: SIX!Flatter delivery from Mishra and Maxwell just thumps it over the fielder at long-off.Â

21:02 hrs IST:Zaheer comes in for his second over.Â

20:54 hrs IST: SIX!Slower delivery from Brathwaite, Stoinis steps forward and hits it down the ground.Â

20:42 hrs IST: SIX!Length delivery from Nadeem, Stoinis dances down the track and smashes it straight down the ground for a maximum.Â

SIX! @MStoinis trying to the up the ante here! He moves on to 27 off 26! #LivePunjabiPlayPunjabi #KXIPvDD

20:40 hrs IST: FOUR!Back of a length delivery from Shami and Saha hits it well to deep backward point region for his first boundary.KXIP are 56/2 after 8 overs.Â

20:24 hrs IST: FOUR!Too full and straight from Morris and Vijay flicks it sweetly past the fielder at short fine leg. 4th boundary for Vijay.Â

20:13 hrs IST: Consecutive boundaries for Stoinis. KXIP off to a brilliant start.Â

Two balls, two fours. Both on tucked away behind the stumps from @MStoinis. Great batting this! #LivePunjabiPlayPunjabi #KXIPvDD

20:11 hrs IST: FOUR!Just a hint of width from Nadeem and Stoinis cuts it well past the fielder at point.Â

20:09 hrs IST: Another FOUR!Too full from Shami and Vijay flicks it in the gap between mid-on and mid-wicket.KXIP are 11/0 after 2 overs.Â

20:08 hrs IST: FOUR!Length ball from Shami, Vijay makes room and smacks it to the right of the fielder at mid-off.Â

19:59 hrs IST:It's time for live action. Vijay and Stoinis make their way out in the middle. Nadeem to start the proceedings for Daredevils.Â

19:28 hrs IST: Hashim Amla most likely to make his IPL debut. But who will he replace, Marcus Stoinis or David Miller? 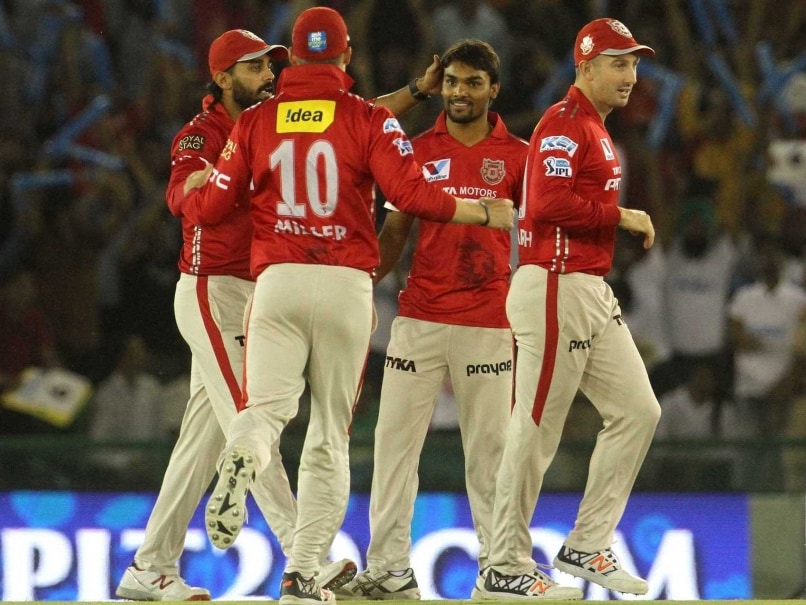 On paper, Daredevils are overwhelming favourites against a Kings XI Punjab side, which has neither shown stomach for a fight nor any kind of proper teamwork to take on the opposition.

More so, the mistakes have been repeated, they have pressed the panic button by replacing David Miller with Murali Vijay as the skipper, which has done little to change the fortune of their team.

Moreover, injury to their most trusted batsman Shaun Marsh has also hampered their progress. However, his replacement Amla is most likely to make his debut for KXIP, and that might be a boon for the side.

On the other hand, the positive aspect of the Daredevils team however has been their ability to stick to the basics and a testimony to the fact is their five wins so far.

Delhi would hope Zaheer gets back into action quickly as he has managed to get early breakthroughs and has been impressive in the death overs in some of the matches.

Also his captaincy and the role of a bowling mentor that he executes in a wonderful manner was missed in the last match.

Another man who was missed was their batting mainstay Quinton De Kock, who has been scoring runs consistently. De Kock was given a much-needed rest so that he could cope up with the gruelling schedule.

Comments
Topics mentioned in this article
Kings XI Punjab Delhi Daredevils IPL 9 Live Blogs Live Cricket Score Hashim Amla Murali Vijay Zaheer Khan Cricket
Get the latest updates on IPL 2021, check out the IPL 2021 Schedule and Indian Premier League Live Score . Like us on Facebook or follow us on Twitter for more sports updates. You can also download the NDTV Cricket app for Android or iOS.