Virat Kohli has been widely criticised for his poor form in the ICC Cricket World Cup 2015 but he has been defended stoutly by the Indian team management. 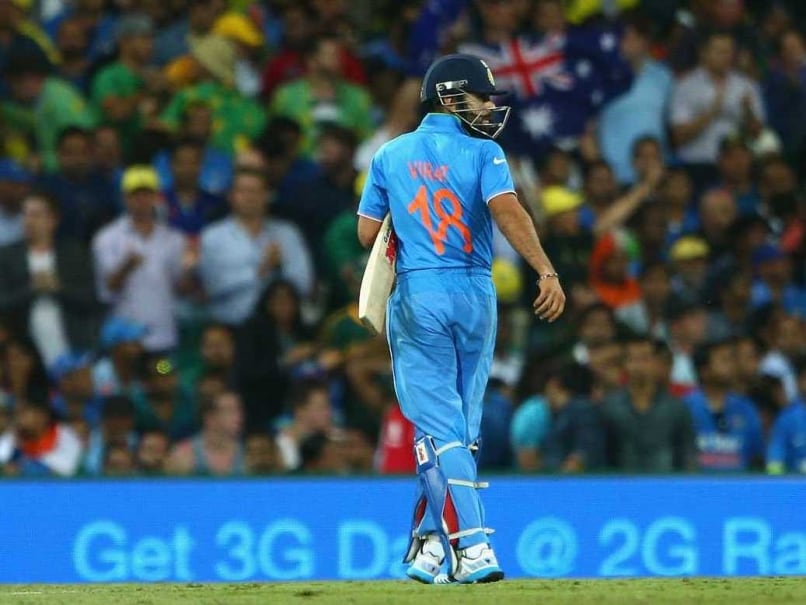 Barring a hundred vs Pakistan, Kohli failed to get past 50 in the World Cup.© Getty Images

Virat Kohli's indifferent form has been the cause of intense debate in several sections following India's exit from the World Cup semifinal, but the dynamic batsman from Delhi has continued to receive support from Indian teammates and coaching staff. (Kohli Has Been Sensational in Australia: Dravid)

Kohli had started India's defence of the World Cup with a composed 107 against Pakistan in Adelaide but managed only 46, 33 not out, 33, 44 not out and 38 in the five league games after. In the quarterfinal against Bangladesh, he was taken out for three and fell for a mere 1 to Mitchell Johnson's pace and bounce as India chased 328 for a spot in the final. (Kohli, the Leader Must Play More Responsibly: Prasanna)

Kohli's dismal run in the World Cup was shocking given his dream run in the four Test matches Down Under. In the ODIs that followed, he barely managed to put bat to ball but the India vice-captain was expected to find some rhythm in cricket's biggest stage. However, everyone fromskipper MS Dhoni to team director Ravi Shastri and former India captain Rahul Dravid defended Kohli's poor returns from the World Cup and added he was a great asset to the team.

For a man who has been appointed Test captain and is the most likely contender to also succeed Dhoni in ODIs in the future, the World Cup flop show has been a huge blot. But India's assistant coach Bharat Arun, who was appointed along with Shastri after the 3-1 Test series defeat in England, also came to Kohli's rescue and said he was great captaincy material.

"He (Virat) has immense passion for the game. He has a good work ethic and is always keen to learn and improve. I am sure he would come out with flying colours in the IPL,'' added the former India all-rounder, Arun told the New Indian Express. "Kohli is passionate about the game. He is not selfish. He thinks and has time for other members of the team. He's spot on technically too, be it field settings, bowling changes or strategies."

Arun and Kohli will come together again during the eighth edition of the Indian Premier League. While Arun has been appointed assistant coach, Kohli is captain ofÂ  the star-studded team.

Kohli's failure to produce a masterclass in the semifinal was met with widespread criticism but Dhoni had asked the media to not make a mountain out of a molehill, adding that a lot of batsmen had failed in such scenarios. Kohli's dry run was also linked to the presence of his girlfriend Anushka Sharma, who had flown down to Sydney for the last-four clash. Shastri had been quick to dismiss such criticism as "utter nonsense".

"If it was so, Virat wouldn't have got 700 runs and smashed four centuries in Tests in Australia. His work ethics is as good as any I have seen. His heart beats for India. It's a pedigree you don't see often. And to tell you the truth, he isn't a finished article yet," Shastri said.

Comments
Topics mentioned in this article
India Cricket Team Australia Cricket Team Royal Challengers Bangalore Virat Kohli World Cup 2015 IPL 8 Cricket
Get the latest updates on IPL Auction 2023 and check out  IPL 2023 and Live Cricket Score. Like us on Facebook or follow us on Twitter for more sports updates. You can also download the NDTV Cricket app for Android or iOS.