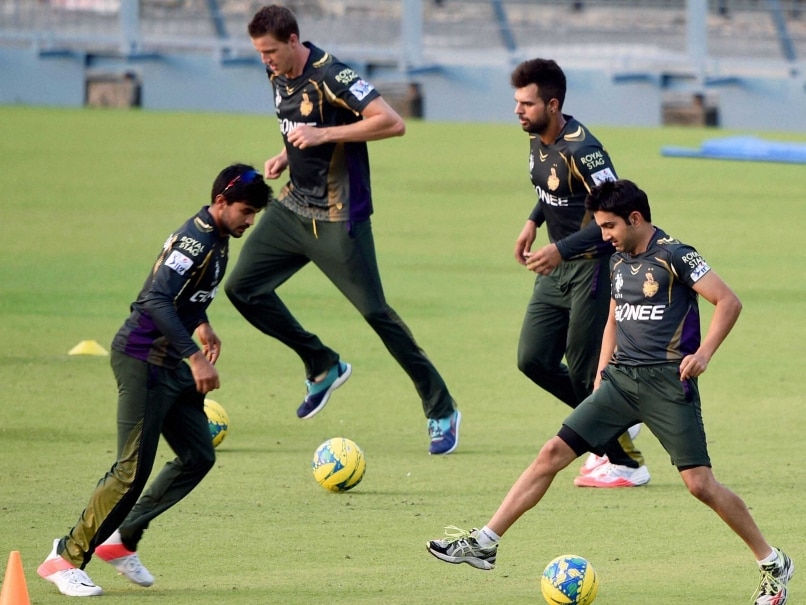 Keen to put the Sunil Narine controversy behind them, Kolkata Knight Riders will begin their title defence against a formidable Mumbai Indians side in the IPL opener at the Eden Gardens, here on Wednesday.

The West Indies mystery spinner, who was reported for suspect action in CLT20 and went on to miss the recently-concluded World Cup, was kept waiting before getting a clean chit by the BCCI on Sunday.

A team which has gone on to win two titles (2012 and 2014) since the acquisition of the Trinidad off-spinner in 2011 faces the biggest challenge this year as Narine's effectiveness with a re-modelled action is yet to be seen.

With a slew of spinners in their armoury now including a 'Narine-like' KC Cariappa, a rookie from Karnataka who was bought for Rs 2.4 crore, and a couple of chinaman bowlers, KKR will look to thrive on the slow nature of Eden surface. (Faulkner Backs Ponting's Views on 'Verbal Duels')

But with evening showers predicted in the city, the spinners may find it hard to grip the white ball and the fielders will also have to put forth their sliding act carefully.

On the field, both the sides match equally on paper but with little baggage of the past and some hard-hitting players in Corey Anderson, Kieron Pollard and new signing Aaron Finch will give an edge to Mumbai Indians.

In MI, KKR will have an opposition who have tasted their maiden IPL win in this very surface in 2013 when the Rohit Sharma-led side beat Chennai Super Kings.

But their title defence went horribly wrong in 2014 when they suffered five consecutive defeats but managed to make the last four after a dramatic win over Rajasthan Royals but lost to Chennai Super Kings in the eliminator to finish fourth. ('IPL Can't Pay for Music?')

The chief architect of the win against RR, Anderson, who smashed an unbeaten 95 from 44 balls, will once again play a crucial role along with this year's star acquisition in Australian opener Finch.

Add Rohit, the leader, to the chart and Mumbai Indians look a mighty batting line-up capable of terrorising any bowling side.

Rohit is known for his inconsistency but he would look forward to start the campaign at his 'favourite' Eden, where he had scored an ODI world record 264 against Sri Lanka in his last outing.

Uthappa also occupied the pole position in the Ranji Trophy with 912 runs from 11 matches as the explosive opener along with skipper Gautam Gambhir would look to give the perfect start before the likes of Manish Pandey, Suryakumar Yadav take charge. (Irfan Pathan Eyes National Comeback Via IPL)

Yusuf Pathan may not have seen the best of day's in the recent past but given his credentials to win a match single-handedly in subcontinent conditions, the senior Baroda pro is worth a bet.

As far as the foreign recruits are concerned, world no 1 all-rounder and Bangladeshi star Shakib Al Hasan will play a crucial role, while the likes of Johan Botha, Brad Hogg and Azhar Mahmood may come handy.

While Lasith Malinga and R Vinay Kumar will lead the pace line-up for MI, the home side will have Morne Morkel and Umesh Yadav who will look to carry forward their World Cup success.

In spin department, experienced pro Harbhajan Singh and Pragyan Ojha can be quite effective.

Off the field, Mumbai Indians' support staff bench is one to look forward to.

Mumbai Indians will not be short on ideas but it will be for only one team to whip up the perfect recipe.

Comments
Topics mentioned in this article
Kolkata Knight Riders Mumbai Indians IPL 8 Cricket
Get the latest updates on IPL 2021, check out the IPL 2021 Schedule and Indian Premier League Live Score . Like us on Facebook or follow us on Twitter for more sports updates. You can also download the NDTV Cricket app for Android or iOS.