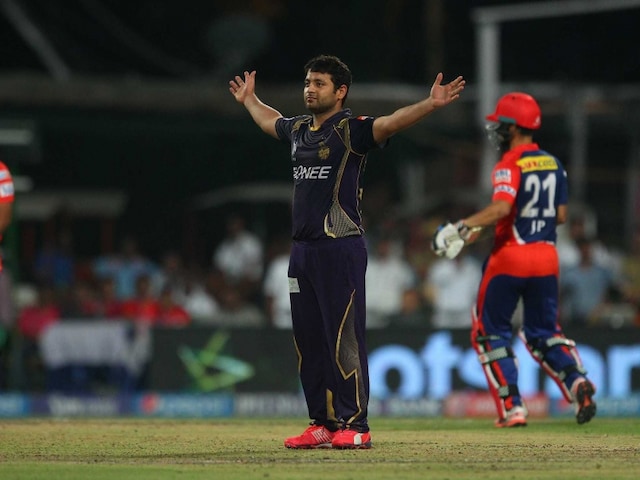 DD's pursuit of 172 was given a severe blow when the Chawla (4/32) claimed three wickets -- Kedar Jadhav, Yuvraj Singh and JP Duminy -- in two overs to reduce them to 111-5 in the 16th over as the visitors could never recover from the blow and were restricted to 158/6.

This was DD's seventh loss of the season as they slipped to seventh position in the eighth team table with eight points from 11 matches and their hopes to qualify for the last four is all but over.

With a second successive win at home, KKR (13 points), on the other hand, brightened their playoff hopes as they jumped past Royal Challengers Bangalore to occupy third place.

Playing with an extra bowler after Sunil Narine got a clearance from the Board with a final warning, a relieved KKR re-jigged their batting order and sent Chawla at No 4 and the leg-spinner contributed with an useful 22 from 19 balls.

Required to score at 8.6 in pursuit of 172, DD promoted Manoj Tiwary to open the innings but the local lad failed to deliver.

Even as Shreyas Iyer (40) looked at ease at the other end, Tiwary played as many as 15 dot balls during his painful 28-ball stay and by the time he departed after Chawla gave the first breakthrough, the run-rate had shot up to 10.80.

It also meant that Iyer, who looked fluent with 40 from 34 balls with three fours and two sixes, panicked at the other end before being foxed by Hogg's guile and dragged the ball onto his off-stump.

Iyer looked impressive in his fifth 40 score -- the first from an uncapped player -- but Tiwary's pathetic innings triggered DD's slow downfall as KKR tightened the noose with their battery of spinners.

Chawla gave a twin blow in the 14th over dismissing Kedar Jadhav (10) and Yuvraj Singh (0) in four balls as skipper Duminy, who provided some resistance at the other end, too ran out of partners and became the leg-spinner's fourth victim.

It was a dream second spell for Chawla who claimed three wickets giving away nine runs to turn around the match.

Sunil Narine, now on final warning for his action from the BCCI, was introduced in the fifth over in which he conceded 10 runs.

Narine looked innocuous as he bowled with caution and returned wicketless in his 31 from four overs.

Earlier, Delhi were severely let down by their fielding and Robin Uthappa benefited the most after being dropped twice during his 31-ball 32 run innings. On both the occasions, the ball slipped in between the fielders' hands.

Manoj let one slip over the boundary when Uthappa was on 15, while Yuvraj who was employed at short midwicket dropped a sitter when the KKR opener was on 23.

Gambhir (12 from 10 balls) had given KKR a typical flying start putting on 38 runs with Uthappa from 4.3 overs before Zaheer Khan gave DD the first breakthrough inducing an outside edge from the KKR skipper.

Aided by the two reprieves, Uthappa and Pandey (22) capitalised on the start as KKR coasted to 50/1 from six overs before Mishra put brakes on the run-rate conceding one run from his first over.

Comments
Topics mentioned in this article
Kolkata Knight Riders IPL 8 Piyush Chawla Cricket
Get the latest Cricket news, check out the India cricket schedule, Cricket live score . Like us on Facebook or follow us on Twitter for more sports updates. You can also download the NDTV Cricket app for Android or iOS.