Johan Botha has previously played in the IPL for Delhi Daredevils and Rajasthan Royals. He was brought by the Kolkata Knight Riders to replace injured Australian batsman Chris Lynn. 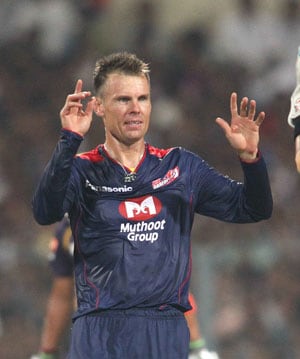 Surprised at the call up, Kolkata Knight Riders' South African recruit Johan Botha, who was brought in as replacement for injured Aussie Chris Lynn, on Saturday said he's fresh after a three-week break and ready for the rigours of IPL-8 cricket tournament. (Indian Premier League 2015: Players to Watch Out For)

"I came to know about this eight or 10 days ago. I played my last game in the Big Bash about a three-week break which I don't think is bad before a long season after coming to India," Botha said.

"It was definitely a surprise. I did not really follow Chris Lynn's injury. I did not know how serious it was," the former Delhi Daredevils and Rajasthan Royals spinner said. (Return of the Indian Premier League)

The South African off-spinner said he hoped to contribute as a batsman in the lower order as he's looking forward to a three-in-one role in the team.

"Be it spin or pace if you can can add some valuable runs at No 6, 7 or 8 it helps any team. Then you do all three of the game -- bat, ball and field," the 32-year-old said. (IPL, the Finishing School of the World Champions)

"These days if you are an out and out bowler, be it spin or pace, you have to be at your best. You need to do really good to just be a bowler in the game. Then you got to be a decent fielder. So you have to do at least two of the three.

"But if you can spin and bat and add to your fielding, then you become a three-in-one player in your team," he added.

Botha also said the Eden track would assist spin which has been the core strength of the defending champions.

"This one helps the spinners definitely. If you see the Knight Riders line-up they have really gone for the spinners that obviously tells you that it does assist the spinners. As the tournament goes on, it starts to spin a bit more. Chennai normally spins a bit and they have got quite a few spinners and also a bit in Wankhede," he said.

Comments
Topics mentioned in this article Kolkata Knight Riders Johan Botha IPL 8 Cricket
Get the latest Indian Premier League 2020 news, check out the IPL 2020 schedule, Cricket live score . Like us on Facebook or follow us on Twitter for more IPL 2020 updates. You can also download the NDTV Cricket app for Android or iOS.
Related Articles