With a trademark toe-crushing yorker on a batting deck at Dharamsala, the Sri Lankan quickie reached 100 Indian Premier League wickets, confirming his status as one of the greatest T20 bowlers in the world. 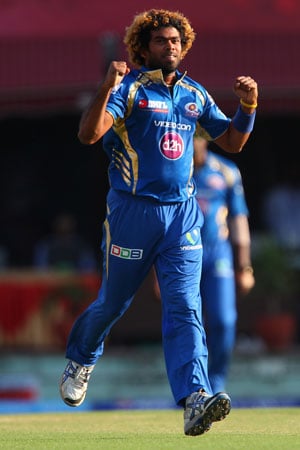 At picturesque Dharamsala on Saturday, Mumbai Indians played Kings XI Punjab in their respective last league games of the season. There wasn't much riding on the match with Mumbai assured of a place in the top-two and Punjab out of the reckoning for a playoff berth. But one man made this fixture special for himself. It was Lasith Malinga.

As the cool winds swept across the lovely stadium, Malinga warmed things up with a hot spell that took him to a landmark any fast bowler will cherish. On the very last ball of the Punjab innings, Malinga ran in hard to Praveen Kumar. A trademark yorker followed and Praveen's off-stump was knocked down. Malinga raised his hands in the air to celebrate his 100th Indian Premier League wicket - becoming the first and only man to do so.

"I am extremely happy at the moment. Before the tournament started I did not think that I would get to this feat," said Malinga after the achievement.

In six editions of the IPL, Malinga has bowled batsmen 46 times and trapped them leg before wicket nine times.Â  A clever bowler who often changes his pace, he has had five caught and bowled.

"Taking 100 IPL wickets is great considering I did not start this season well. However I have improved as the season has progressed and now look to perform at my best in the playoffs for Mumbai," added the Sri Lankan.

He also paid tribute to his national teammate and former captain Mahela Jayawardene.

"Mahela was an unbelievable captain for us (Sri Lanka). I have learnt a lot from him and he has given me immense confidence in my bowling," said the 29-year-old.

Predictably, Malinga is also the highest wicket-taker in IPL history. During the course of this season, Amit Mishra had overtaken Malinga in the all-time wicket-taker list. But Malinga has struck back in the latter few games leaving Mishra behind on 93. RP Singh follows on 87 with Pragyan Ojha having picked 84 IPL wickets, Vinay Kumar 83 and Piyush Chawla 82.