The stadium here is modern and wonderfully atmospheric, and there was no disguising the enthusiasm of the crowd that queued up in blast-furnace afternoon heat. 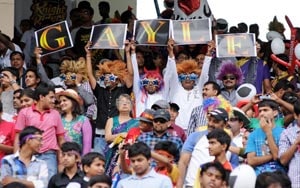 Wherever you go in Ranchi, you can't escape Amitabh. The angry young man who epitomised Bollywood in the 1970s still commands a sizeable following in many parts of India, but it's not his posters and billboards that stare at you from every vantage point in the city. No, this is Amitabh Choudhary, top cop who also has his hands on the tiller of Jharkhand cricket. His website describes him as a "Person with Winning Attitude", and the busy traffic intersections in Ranchi invariably feature at least one fawning message dedicated to him. It's almost like being in Tamil Nadu when a Rajinikanth movie is released.

Some credit where it's due though. The way the city has responded to these two Indian Premier League games more than justifies Choudhary's attempts to bring them here. The stadium is modern and wonderfully atmospheric, and there was no disguising the enthusiasm of the crowd that queued up in blast-furnace afternoon heat.

With almost all the signage in Kolkata Knight Riders' purple, the venue looked straight out of a 1980s Prince video, but what really caught the eye were the vast swathes of red in the crowd. It may be 1850 kilometres from Bangalore to Ranchi, but Kolkata certainly didn't enjoy the kind of one-eyed support they'd expect to get at a home game.

Quite a few things about this game exposed myths that are often taken for granted when it comes to Indian cricket. In recent times, especially after the tepid crowd response to World Cup matches not featuring India in 2011, it's become routine to say that the spectators love Indian cricket, rather than the game itself.

How do you explain then that the most popular shirt, according to those selling them for 100 Rupees on the streets, was Chris Gayle's with the number 333 on the back? Perhaps the truth is a little more nuanced. With millions of Indians now having access to world-class sport on their TV screens, no one's prepared to hand over hard-earned money for second-rate action. Put a Gayle - the Bradman of Twenty20 cricket - in front of them, however, and they don't mind queuing for hours to get in.

Choudhary aside, the other ubiquitous face on the city's billboards is Mahendra Singh Dhoni. From concrete to cola ads, it's hard to miss his smiling face. It's perhaps a good thing that Kolkata decided not to host Chennai Super Kings here. The demand for tickets would probably have created a law-and-order situation. As it was, tickets marked at Rupees 700 were selling for three times that, with the odd entrepreneurial woman also entering the touting fray.

Dhoni may have put Ranchi on the modern-day Indian sporting map, but his first love was football, and the city boasts the massive Birsa Munda stadium in the suburb of Morhabadi. As you drive out of the city, towards Jamshedpur and the numerous waterfalls, it's makeshift football goalposts that you'll find on empty patches of ground.

Eighty years before Dhoni led his country, there was Jaipal Singh, a Munda who captained India to the first of eight Olympic hockey golds at Amsterdam in 1928. Known as Marang Gomke (Great Leader), he would go on to become a leading advocate of tribal rights. That the state of Jharkhand exists today is largely because of his efforts.

Earlier this year, the Ranchi Rhinos won the inaugural Hockey India League to great local acclaim. Unlike many other parts of India, this is no one-sport town. But the response to this IPL spectacle is yet another reminder to the game's administrators that the future does not lie in the Tier-I cities. The next Dhoni, or the next Tendulkar, is far more likely to be waving a flag or fielding a ball in Ranchi, rather than at the Wankhede.

Comments
Topics mentioned in this article
Cricket IPL 2013 Shoaib Akhtar Chris Gayle Royal Challengers Bangalore Kolkata Knight Riders Ajaysinhji D. Jadeja
Get the latest updates on ICC T20 Worldcup 2022 and CWG 2022 check out the Schedule, Live Score and Medals Tally. Like us on Facebook or follow us on Twitter for more sports updates. You can also download the NDTV Cricket app for Android or iOS.