The left-arm spinner said he is varying his pace and trying to bowl more slower deliveries in this format. 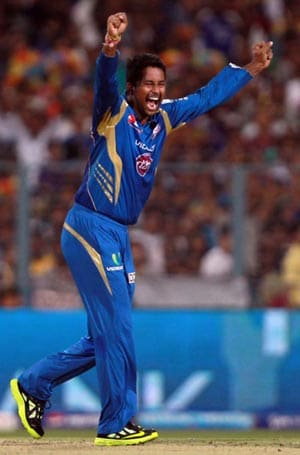 Mumbai Indians left-arm spinner Pragyan Ojha applauded captain Rohit Sharma for his calm approach and said that the young skipper takes his own decisions on the field.

"He is very cool on the field. He takes his own decision. We have a few seniors and as a youngster when a senior says something, there is a little bit of pressure but he handles it very well. And he is very calm and composed," Ojha told reporters at the post match press conference here.

"He always tells you, you have to get me couple of wickets. As a captain it is important when he comes and gives you lot of confidence. So you open out as a bowler," he said.

Having posted a challenging 170, Mumbai Indians bowled out the Kolkata Knight Riders for 105 in 18.2 overs on Tuesday night to register a comfortable 65-run victory here, and Ojha said the hosts got a good pitch to bat on.

"Mumbai got a very good wicket to bat on. Especially the last couple of games -- the last game and this game -- it was a bit slow. Getting 170 with our bowling it was something challenging for KKR," he said.

"We have got a very good batting line-up. Anyone who walks in, has got some amount of experience behind him, so we were confident."

The Bhubaneswar-born bowler said he is varying his pace and trying to bowl more slower deliveries in this format.

"I keep things simple and vary the pace and spin the ball. Normally in this format, I have seen the bowlers bowl really fast, so they cut down on turning the ball. People like Anil Kumble, when you have (as a mentor), his experience always helps you.

Asked if KKR did the right thing by leaving out Sri Lankan spinner Sachitra Senanayake, considering that he and Harbhajan Singh shared five wickets between them, Ojha said, "The wicket was a little slow and holding up a bit and turning, so may be another spinner would have been some sort of an advantage for them."

The 26-year old Ojha, who got rid off the dangerous Yusuf Pathan, said getting his wicket was important.

"He is known for his big hitting, he would have played a crucial role. Getting him out at that point of time was crucial," he said, adding that the team had chalked out plans for the top-order batsmen as well.

Left out of the Indian squad for next month's Champions Trophy, Ojha said he just wants to focus on taking wickets.

"The selection is not in my hands. I have got a ball, I have got a ground and I have to go and perform, and I am doing that. I am happy and I am positive about it. As long as I am performing, I am really happy and in good space.

"The selection is something I shouldn't be thinking about, that is what I have told myself. I am just focusing on taking wickets. At some point of time, I might get a nod," he said.

Comments
Topics mentioned in this article
Cricket IPL 2013 Shoaib Akhtar Pragyan Ojha Kolkata Knight Riders Mumbai Indians Ajaysinhji D. Jadeja RG Sharma
Get the latest updates on ICC T20 Worldcup 2022 and CWG 2022 check out the Schedule, Live Score and Medals Tally. Like us on Facebook or follow us on Twitter for more sports updates. You can also download the NDTV Cricket app for Android or iOS.