Talking about West Indies' chances in the ODI series, tied at 1-1 after they gifted the win to India in Delhi, team manager Richie Richardson said the "boys" were in a positive frame of mind. 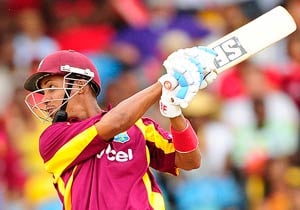 File photo: Simmons had to be flown back to West Indies because of a back injury.

The West Indies on Thursday replaced injured batsman Lendl Simmons with left-arm spinner Nikita Miller for the remainder of the ODI series against India.

"There were chances that Simmons will recover from back injury but we realised that he had to be flown back home for further treatment. Nikita is on his way from Sri Lanka to replace Simmons," said West Indies team manager Richie Richardson ahead of the fourth ODI here on Friday.

Talking about West Indies' chances in the series, tied at 1-1 after they gifted the win to India in Delhi, Richardson said the "boys" were in a positive frame of mind.

"We were good for eighty overs and lost our way in the next 20. We need to think about the positives than the negatives and continue the way we have been playing. The guys are upbeat and looking forward to the game. Hope conditions here will favour us and we will have a very exciting and successful match," he said.

The West Indies skipped practice after arriving late in the afternoon on Thursday for the second-ever ODI at the HPCA Stadium.

"We just arrived here so practice was not possible. We left the day for some recovery exercises. It is a beautiful venue, the facility is very nice. It made me feel like I wanted to play cricket again. Hopefully, the wicket will provide an exciting match," said Richardson, a former West Indies captain.

He refused to comment on the controversy regarding the players' payment dispute with WIPA.

"To be honest we are focused on match. I don't wish to comment on anything else," he said with a straight face.

Richardson has expectations from left-arm spinner Sulieman Benn, who replaced Sunil Narine in the squad after the latter's action was reported during CLT20.

"Benn (79 wickets) has more Test wickets than Sunil (21). In fact I was his first captain. He has wealth of experience and knows what he needs to do. He bowled extremely well at home against Bangladesh," said Richardson when asked about Benn's role in the team.

"I have not heard about the meeting but if you have the powers to arrange it please do. I look forward to meeting the great man," he signed off in trademark West Indies style.