Is Rohit Sharma's World Cup 2015 Spot in Jeopardy? Yes and No!

With Ajinkya Rahane slowly making the opener's slot his own and India being spoilt for choices in the middle-order, is the lack of international exposure eventually going to cost Rohit Sharma a ticket to the World Cup Down Under? 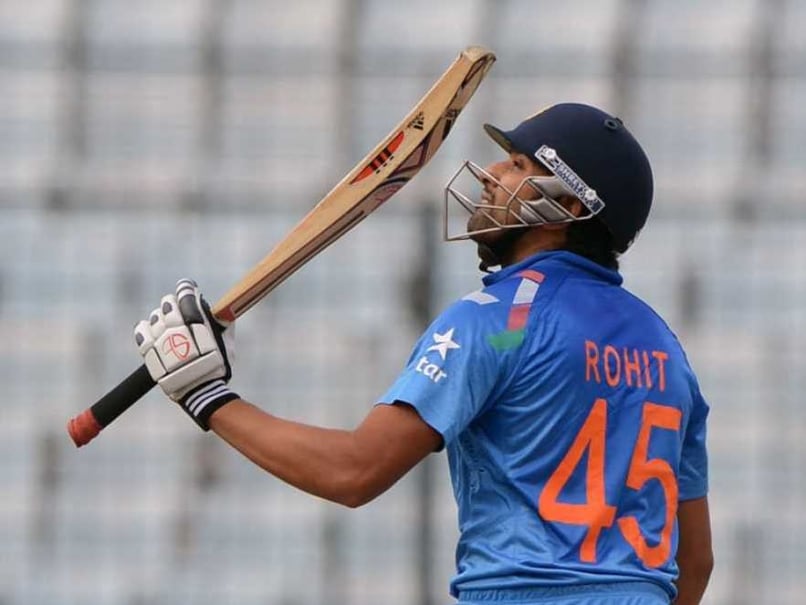 Rohit Sharma must be a worried man. While he sweats over his own fitness and rehab from multiple injuries (back and hand), a clear lack of quality exposure and rather ordinary overseas performance could dent his dream of playing in 2015 World Cup Down Under.

Having missed three of the four ODIs vs England, the Champions League T20 and the truncated home series versus the West Indies (4 ODIs) due to injuries, Rohit has his work cut out. The Mumbai batsman is in the India A squad for the lone warm-up match vs Sri Lankans to be played on October 30 but it will take a stand-out performance in that game for him to win back his place in the ODI side for the fourth and fifth matches.

The national selectors may have been forced to keep Rohit on the sidelines, but have certainly not lost faith. Only consistent performances in domestic circuit will instill confidence in the selectors to put him on the plane to Australia where England will be the third team.

Rohit has been around long enough in the international circuit (124 ODIs since 2007), but inconsistency has been his biggest bane. The great Sunil Gavaskar spoke eloquently about his potential when he scored torrents of runs during IPL 2013. Yet, a poor ability-to-performance ratio has meant that he has failed to cement his spot in Team India.

One among only three to score a double-century (after Sachin Tendulkar and Virender Sehwag) in ODIs, Rohit has been exceptional in patches. Consequently, his World Cup berth continues to hang by the thread. And as irony would have it, a fellow Mumbaikar seems to have stolen the march and left him guessing.

Ajinkya Rahane too comes from the same school of thought that prescribes just one solution for continued success: runs, runs and more runs. His tally of 1,050 runs from 37 ODIs at an average of 28.37 is not only his only 'asset.'

Rahane showed a great sense of temperament in challenging conditions in England. His Test century at Lord's, Rahane's second, was testimony to the fact that he was dependable and could be tested in various conditions.

Rahane also showed that he could stand tall and weather a fierce storm in South Africa. He managed two 50-plus scores in four innings, with a fighting knock of 96 in the second Test at Durban with the likes of Dale Steyn, Vernon Philander and Robin Peterson tearing the rest of the line-up to shreds.

The selectors' propensity to take IPL for into account also helped Rahane. Since his move from Mumbai Indians to the Rajasthan Royals in 2011, Rahane has been their regular opener. Shedding the early notion that his textbook technique will not suit the slam-bang format of the game, he has been one of the most consistent performers for the Royals. With 11 fifties and one century in four seasons, Rahane made the opening slot his own.

From being a middle-order floater early in his ODI career, Rahane has eased into the opener's role and also seems to have won over his skipper Mahendra Singh Dhoni's confidence. The Indian captain was quoted saying he now prefers playing Rahane at the top with Shikhar Dhawan and maybe push Rohit down to the middle-order.

The biggest chink in Rahane's armour however, has been his failure to consolidate. Often he manages the tough job of getting his eye in and seeing out the initial overs of the game, only to throw his wicket away after getting to mid-30s and 40s. His inability to put a price on his wicket could be a big negative.

Rohit's re-entry into India's middle-order is not going to be easy. Virat Kohli, with 20 ODI tons in just six years of international cricket, has virtually 'clinched' the number three position. The fourth and fifth spots seem to belong to Suresh Raina, Mahendra Singh Dhoni while Ravindra Jadeja and Ambati Rayudu have been used at six and seven.

Of the lot, Rayudu seems like the weakest link and may have to face the axe to make way for Rohit, if that's what Dhoni prefers. Rayudu has seldom had a defined position in the Indian line-up and has essayed the role of a typical floater.

When Kohli was pushed down to number four against West Indies, in search of his lost form, Rayudu walked out to bat at number three. When Kohli reclaimed his place in the very next ODI, Rayudu was thrown back to number seven. Is Rayudu a mere 'filler' until Rohit returns? Only time will tell.

If Rayudu is not threatening enough, Rohit may also face unexpected competition from a couple of senior pros. A few good consistent performances in the Duleep Trophy could tempt the selectors to fall back on the experienced Sehwag or Yuvraj Singh.

The selectors may toy with the idea of trying Sehwag and Yuvraj out in the tour Down Under in November and take a further call on the World Cup based on performances there.

Yuvraj's uncanny ability as a proven match-winner and a big-match player is well-documented while an aggressive in-form Sehwag in the middle order could also be a game-changing option.

With just four months to go for the showpiece event, Rohit is running a race against time to prove his credentials again. With only two possible ODIs and a handful of domestic games to prove his worth, the road ahead too appears to be highly bumpy.

Comments
Topics mentioned in this article
Rohit Sharma Ind vs SL, 2014-15 India Cricket Team Cricket
Get the latest updates on T20 World Cup, check out the T20 World Cup Schedule and Live Score . Like us on Facebook or follow us on Twitter for more sports updates. You can also download the NDTV Cricket app for Android or iOS.