Despite the match being held on a Sunday, the swanky JSCA International Stadium Complex would remain empty in MS Dhoni's absence, according to the host association. 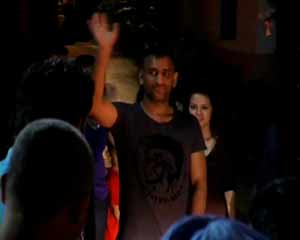 A file pic of MS Dhoni and his wife Sakshi in Ranchi.

With Ranchi's famous son MS Dhoni out of action with an injury, the buzz is missing ahead of the fifth and final ODI between India and Sri Lanka here on Sunday. (India Look for 5-0 Whitewash)

Despite the match being held on a Sunday, the swanky JSCA International Stadium Complex would remain empty in Dhoni's absence, according to the host association. (Raina Rested for 5th ODI)

"We have had about 40 per cent ticket sales and taking account of the complimentary ones we think about 20,000 will turn out for the match tomorrow. Of course, Dhoni is the biggest crowd puller here," Jharkhand State Cricket Association vice-president Manoj Kumar told PTI.

It was during the first International match that the stadium hosted on January 19, Dhoni was seen turning up in his favourite Hummer on the match eve as fans made a beeline screaming their hero's name.

But unlike in the past, there has been no buzz this time around as the Indian team came and returned quietly after their three-hour long practice session in the morning. Dhoni has suffered a hairline crack in his thumb and the selectors were forced to keep the Indian skipper out for the Lanka series and as well as for the first Test versus Australia beginning December 4.

Another reason the JSCA official gave for the lack of interest was the five-phase assembly elections to begin from November 25.

"Many are busy with election campaigns giving the match a miss," he said.

This will be the third International match at the posh-looking stadium in the southwest outskirts of the city since it hosted the first ODI on January 19 last year.

Comments
Topics mentioned in this article India Cricket Team Sri Lanka Cricket Team MS Dhoni Ind vs SL, 2014-15 Cricket
Get the latest Indian Premier League 2020 news, check out the IPL 2020 schedule, Cricket live score . Like us on Facebook or follow us on Twitter for more IPL 2020 updates. You can also download the NDTV Cricket app for Android or iOS.
Related Articles