India Score a Century of Wins Across Formats vs Sri Lanka

India whitewashed Sri Lanka in the five-match ODI series that ended with a three-wicket win in Ranchi on Sunday. 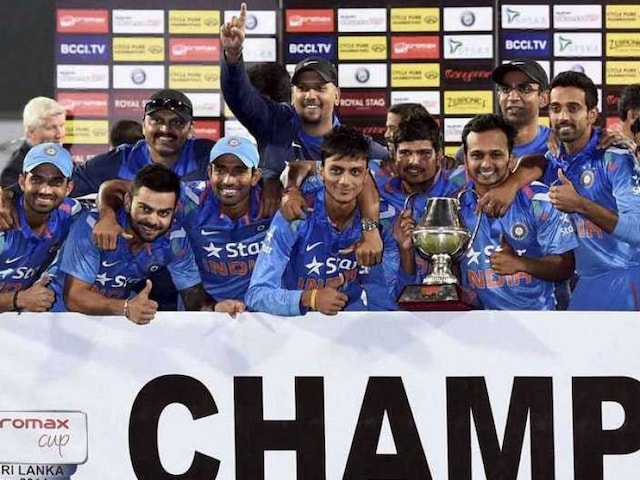 It is for the fifth time that India has achieved a 5-0 whitewash in a five-match ODI series.© PTI

India completed a five-nil thrashing of Sri Lanka in Ranchi on Sunday night. For the Lankans, it was their ultimate humiliation, losing a series by a 5-0 scoreline for the first time ever. For Team India, it was their 100th win across all formats against the former world champions. (Also read: Kohli lauds Team India for aggressive, positive attitude)

Virat Kohli slammed a timely century to ensure India remained undefeated in what turned out to be a one-sided series. India's three-wicket triumph was their 100th across all formats out of 190 played against Sri Lanka -- 83 in ODIs; 14 in Tests and three in T20Is. India have lost 63, tied one, drawn 15 and 11 matches produced no result. (Angelo Mathews stands tall amid ruins)

India became the first team to accomplish 100 wins against Sri Lanka. India's second best tally across all formats is 74 wins out of 211 against England. (India consolidate No. 1 ODI ranking)

India have completed a 5-0 whitewash five times in ODIs -- twice against England and once each versus Sri Lanka, New Zealand and Zimbabwe. Mahendra Singh Dhoni and stand-in skipper Virat Kohli have accomplished this feat twice each.

Kohli said it was a challenging task to beat Sri Lanka so convincingly. "It's not easy to have a whitewash especially against a sub-continent team in the sub-continent. It's always a very difficult thing so really glad the way the guys have responded to whatever I've asked of them. I'm really satisfied as a captain," Kohli said.

Kohli had filled in for an injured Dhoni. Kohli will also lead India in the first Test against Australia at Brisbane starting December 4. This will mark Kohli's Test captaincy debut.

Comments
Topics mentioned in this article
India Cricket Team Sri Lanka Cricket Team Ind vs SL, 2014-15 Virat Kohli Angelo Mathews Cricket
Get the latest Cricket news, check out the India cricket schedule, Cricket live score . Like us on Facebook or follow us on Twitter for more sports updates. You can also download the NDTV Cricket app for Android or iOS.