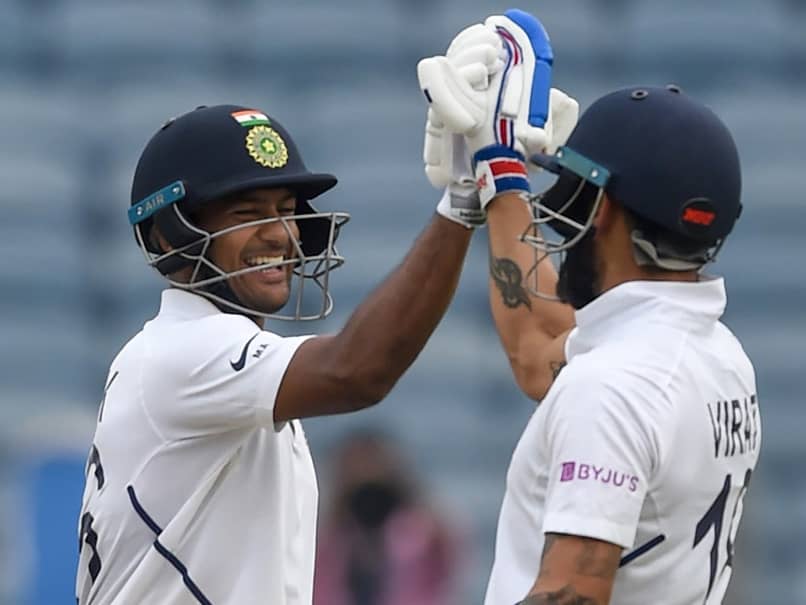 The brisk pace at which skipper Virat Kohli scored his double hundred has given the Indian bowlers enough time to get 20 South African wickets, reckons opener Mayank Agarwal. Kohli's best-ever Test score of 254 not out and his 225-run stand with Ravindra Jadeja (91) in only 39.1 overs formed the cornerstone of India's mammoth 601 for five declared. Kohli's big knock came at an impressive strike rate of 75.59 as he hammered 35 boundaries, including two sixes, in his 336-ball innings.

"Definitely, it has put us in driver's seat and it's not just the amount of runs but at what pace those runs have come has made the huge difference," said Agarwal, who got to his second successive Test hundred on the opening day.

Indian pacers have already reduced the Proteas to 36 for three at stumps on the second day.

"The double hundred has given the team extra session and half, which becomes very crucial. The partnership between Virat and Jadeja was fabulous and almost at run a-ball 230-odd (225), which is fabulous. If you are looking to win games, then you want to have that time to get 20 wickets," said the Karnataka right-hander.

"To get a 250, it's no joke and way he is batting is tremendous. The positivity and intent is fabulous. The records and his scores, prove everything that we all need to see (learn)."

In fact, the first session of the second day set the tone as Kohli and Ajinkya Rahane hardly gave any chance.

"Virat and Rahane during the last evening, around hour and half, when ball was doing a bit under lights, played really tight. They didn't give opposition a wicket, in the first session and that put us in driver's seat and we could do what we did in the second session."

Ask him about his manic consistency since 2017, Agarwal spoke about how he focussed on ticking the boxes rather than instant results.

"You need to put a mark (target) and make sure that at the end of the year, whatever time (frame) you have set, you tick those boxes," he added.

"Sometimes you put in effort and it's not like you get instant result. You have to keep doing your things, keep ticking the boxes, keep improving, putting in performances year after year, the selection will eventually come."

A prolonged stint with the India A team did help him, he said.

"India A games really helped to bridge the gap between domestic and international cricket, because the kind of (domestic) teams you are facing and kind of teams other countries are fielding, for those games are top quality. So you know that you are almost playing international standard bowling," Agarwal added. After second day's play, South Africa are still trailing India by 565 runs.

Ajinkya Rahane Maharashtra Cricket Association Stadium, Pune India vs South Africa, 2019 Cricket India vs South Africa, 2nd Test
Get the latest updates on India vs Australia Series, check out the India vs Australia Schedule for 2020-21 and Ind vs Aus live score . Like us on Facebook or follow us on Twitter for more sports updates. You can also download the NDTV Cricket app for Android or iOS.