Mohammed Shami bowled a lethal spell on the fifth day in Vizag that went a long way in India winning the first Test by 203 runs. 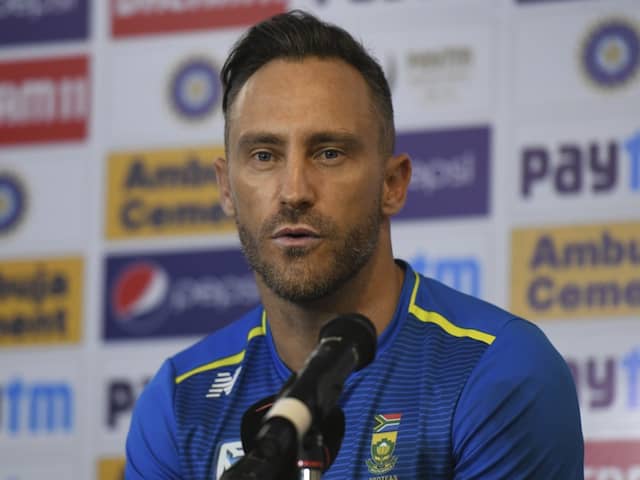 Faf du Plessis was impressed with the intensity with which Mohammed Shami bowled on the fifth day.© AFP

Skipper Faf du Plessis feels that younger South African fast bowlers can learn a lot from Indian pacer Mohammed Shami as to how one can be so devastating in home conditions. Shami bowled a lethal spell on the fifth day in Vizag that went a long way in India winning the first Test by 203 runs. "I spoke to one of our young bowlers too and said to him that it's a good learning opportunity for you to sit and watch what someone does when they're on top of their game in home conditions," Du Plessis said during his pre-match media conference.

"Just learn from (the use of) his angles of the crease and how does he reverse the ball. So yeah there's definitely something to learn from."

What Du Plessis found fascinating was the intensity with which Shami bowled on the fifth day.

"There's a huge intensity about his bowling. You are going to bowl short spells in the heat but when you bowl you have to ensure that you bowl with a lot of intensity and maximize it," South Africa skipper said.

There is in fact a lot to learn from the lengths he bowled, reckons Du Plessis. "He's a guy that hits the stumps a lot. That's something from a bowling point of view, we have to make sure, we are better at," he said.

"In the first innings especially, we bowled wide and therefore they scored frequently square of the wicket. So there are a lot of lessons to learn," he opined.

While he didn't go into the specifics, Du Plessis indicated that there could be a change in the playing XI, going into the next Test match.

"Obviously, we didn't get 20 wickets in the previous match and that is something we are trying to fix and get better at in this match. End of the day, that's what wins you test match. Our thinking will be to pick players that will influence the game and win matches for the team."

In 2017, Pune Test witnessed a rank turner where India lost (vs Australia) its last home game in the longer version in recent times.

However, Du Plessis insisted that with World Test Championship on, pitches won't be diabolical in nature.

Du Plessis was part of the Proteas side that was whipped by India in 2015 during a Nagpur Test which was over within two and half days.

In fact, the Nagpur pitch was later rated "poor" by the ICC. "With the Test championship, it has changed.

Even in South Africa, if you had a below-average pitch, you probably got a warning whereas now, you have points deducted," he said.

"From the home conditions point of view, I think it is not as obvious as making wickets like the one in 2015. Knowing Indian conditions, the turf is a little more red, so I expect the ball to spin a little more than the first Test.

"We'll have to see how the pitch behaves. I am not a pitch expert but I think it'll take more turn than the first Test."

Faf du Plessis India vs South Africa, 2019 Cricket
Get the latest Cricket news, check out the India cricket schedule, Cricket live score . Like us on Facebook or follow us on Twitter for more sports updates. You can also download the NDTV Cricket app for Android or iOS.