India vs South Africa: Faf Du Plessis Might Send Substitute For Toss In Ranchi. Here's Why

Faf du Plessis has a novel idea to change his luck when it comes to going in for the toss for the third Test with India. 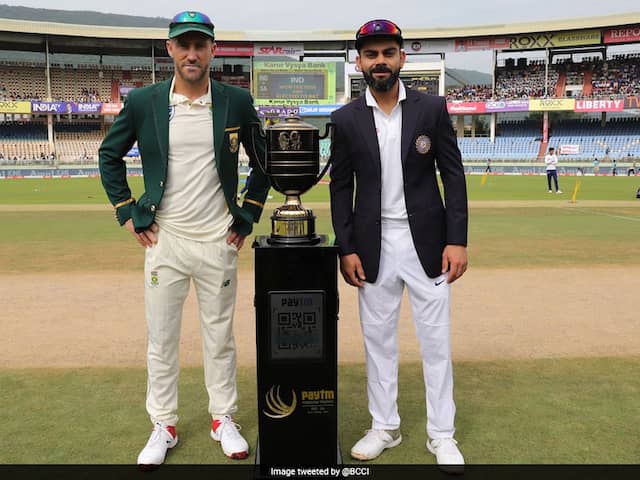 Faf du Plessis has lost nine straight coin tosses in Test matches played in Asia and he is desperately seeking ways to break his losing streak. So when Virat Kohli walks out for the toss ahead of the 3rd and final Test against South Africa in Ranchi on Saturday, he might find someone else representing the visitors. During a media interaction, Du Plessis said that he won't mind sending someone else to turn South Africa's fortunes around. "Probably I will send somebody else to the toss tomorrow, I'll give you that, because my record so far hasn't been great, and then if we put big runs on the board in the first innings, that's where we need to start," Du Plessis said.

The hosts inflicted a heavy defeat on South Africa in the second Test to take an unassailable 2-0 lead in the three-match series.

Despite losing the series, Du Plessis has asked his players for improved performances with the bat when they face India in the third and final Test starting in Ranchi on Saturday.

"We need to put big runs on the board in the first innings," Faf du Plessis had said while addressing a press conference on Thursday.

"When you get runs in the first innings anything from there is possible. For us first innings runs will be vital and then anything could happen in the second innings," he added.

Du Plessis also asked his batsmen to learn from their Indian counterparts and put up a much-improved show in the final Test.

"If we get runs in the first innings, then anything from there is possible," said Du Plessis.

"The pitch looks a little bit drier, a little bit crustier, so first-innings runs are going to be vital, and then anything is possible in the second innings."

However, Virat Kohli insisted that India will not relax and will be eyeing a whitewash to extend their lead in the ICC World Test Championship.