India vs South Africa: Dean Elgar was hit on the helmet and had to leave the field as the new rule of a concussion replacement was brought into play. 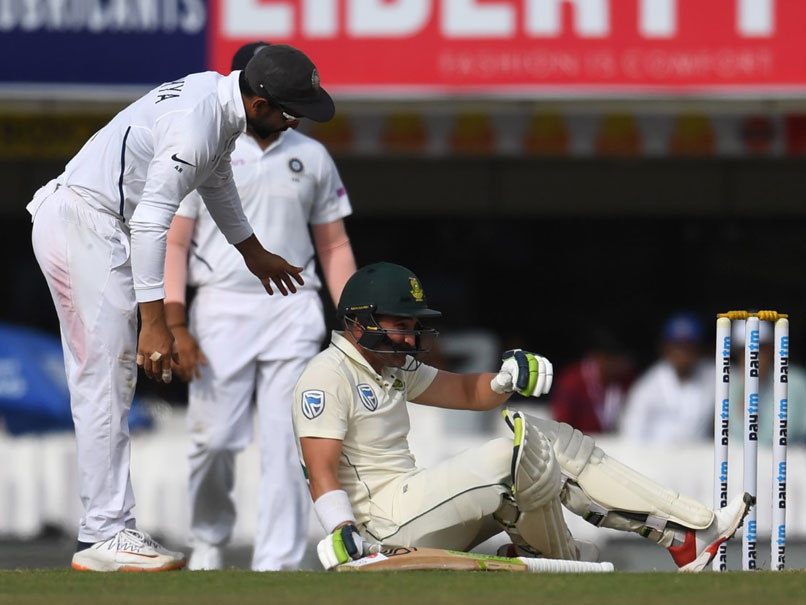 India vs South Africa: Dean Elgar was hit on the helmet by a Umesh Yadav bouncer.© AFP

Dean Elgar was ruled out from the 3rd Test vs India match after he was stuck by a fiery Umesh Yadav bouncer just before the Tea on Day 3 of the third Test, Cricket South Africa tweeted. The South African board named Theunis de Bruyn as Elgar's concussion substitute -- a new rule which came into effect in August this year. The third Test, which is being played at JSCA International Stadium Complex in Ranchi, saw the visitors fall once again with the bat as they were bowled out for 162 in their first innings, giving India a lead of 335 runs. After taking a solid-first innings lead, the Indian skipper Virat Kohli enforced the follow-on.

Dean Elgar will not take any further part in this Test match.

What is new ICC concussion rule?

The International Cricket Council (ICC), after a long trial, allowed teams to name a like-for-like replacement from within their squad for a player who suffered a serious head injury during the match. The Ashes 2019 between England and Australia was the first series which benefited from this new ICC rule.

"The opening batsman will be closely monitored over the next 24 hours, followed by reassessment every 24 hours until signs and symptoms resolve. The soonest he can return to play is in six days' time in keeping with the standard concussion management protocol," Cricket South Africa said in a statement.

In Pune, things went from bad to worse for South Africa as they were reduced to 26/4 at Tea on Monday. Elgar was unbeaten on 16 off 29 balls but couldn't come out to bat, with George Linde replacing him at the crease in the final session.

After enforcing the follow-on, the Indian fast bowlers wreaked havoc on the visitors as they dismissed five batsmen even before they could touch the 50-run mark. Half of the South African batting line up was dismissed inside 17 overs. Mohammed Shami accounted for three of these wickets while his bowling partner Umesh Yadav claimed two wickets.

JSCA International Stadium Complex, Ranchi India vs South Africa, 2019 Cricket India vs South Africa, 3rd Test Theunis de Bruyn
Get the latest updates on IPL Auction 2023 and check out  IPL 2023 and Live Cricket Score. Like us on Facebook or follow us on Twitter for more sports updates. You can also download the NDTV Cricket app for Android or iOS.