Pakistan, currently in India for the bi-lateral series, have managed a string of decent performances with a good record against England in UAE where Saeed Ajmal managed to outfox the batsmen. 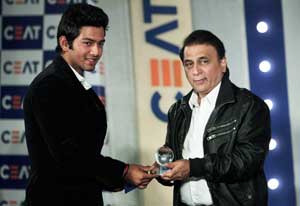 India vice-captain Virat Kohli was adjudged the International Cricketer of the Year while Pakistan bagged the top honours for the best team at the CEAT Cricket Awards 2011-12 here Thursday.

Kohli beat Hashim Amla, Kumar Sangakkara and Michael Clarke to bag the award. Kohli was the top run-getter for India in both Tests and ODIs last year, and his career-best 183 came against Pakistan in the Asia Cup in March last year.

Delhi youngster Unmukt Chand, who led India to the U-19 World Cup win last year, got the inaugural Indian Youngster of the Year award.

"It is a great honour for me. The World Cup win was special for us. This is my second award and I hope such awards will boost my confidence in the future," he said.

Legendary fast bowler Akram, who also collected the award on behalf of the Pakistan team, said it was a great honour for him.

"It was in 1999 when I got the award for the Pakistan team. It was a great honour for me. Now as I collect the award on behalf of the team, I feel honoured again," said the former Pakistan captain.

Kapil Dev also lauded the Pakistan team for its impressive performance in India. Pakistan have already sealed the three-match ODI series 2-0. The last and the final ODI to be held here Sunday is now a dead rubber.

"The Pakistan team has been exceptional. They deserve to win. They have a great batting and bowling attack," said Kapil.

Asked what went wrong for India in the series, Kapil said: "The less we say it's better. Let us enjoy the chilly Delhi weather. Day after (Sunday) we will enjoy some better cricket. Indian cricket team has a good reputation but they haven't played well this time. Hopefully they will do well in the coming days."

On getting the award, Kapil said: "It is tough to say how difficult it is when you play against Pakistan. The pressure takes over you. You have to hold your nerves."

The awards ceremony was attended by former cricketers from both sides of the border like Gavaskar, Kapil, Yashpal Sharma, Ajay Jadeja, Akram, Izamam, Abbas, Anwar and Rameez Raja.