The former chief selector believes Virender Sehwag, Gautam Gambhir and Zaheer Khan have to perform well in domestic cricket to return to the national side. 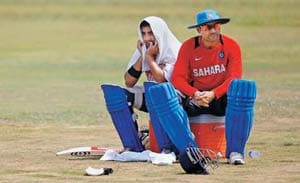 "Competition is a healthy sign for Indian cricket. There is a good healthy competition going on. Whoever performs will be in the team. If somebody is unfit then Gambhir or Sehwag, or (even) Zaheer Khan, can walk in. You need experience also when you go on tough tours. Overall it is looking good and you can fall back on some of the players," More told PTI in an interview.

The left-right combination of Delhi's Dhawan and Mumbai's Sharma has done exceedingly well in the short time it has been in action with India riding on the duo's consistency to clinch the ICC Champions Trophy in England and the triangular series in the West Indies.

Praising the performance of Dhawan and Sharma, More was of the opinion that one of the two experienced senior openers could return to the mix provided they do consistently well in the upcoming domestic season, as that would give the team more options if either of the younger lot fails.

"They (Gambhir and Sehwag) have to keep performing in domestic cricket. They need to have the belief. It is a healthy competition. All these players who are playing at the moment could also have a bad phase and some of these guys can come into the team then.

"When you look at the balance of the team, Rohit as an opener is doing well for the team. The selectors, coach and captain gave him the opportunity and he grabbed it. His experience is helping him. Definitely he is a class player. He is doing well.

"Shikhar Dhawan and Rohit Sharma are also good fielders. They have put up good partnerships. But you need to look at one more option if something happens to Rohit or Shikhar. So even Sehwag or Gambhir can come in the team, if they get the opportunity," he said.

Looking ahead to the next World Cup due in two years' time, More said India needs to iron out some problems in the pace department and should have a good back up.

"We need good fast bowlers. Most of the fast bowlers have major injuries. To come back and get into the team is not so easy. Umesh Yadav and Bhuvneshwar Kumar are bowling very well. We need to look at a few more options in the fast bowling department. The Indian team is lacking a little bit in that area," he said.

The Baroda man further said that some of the youngsters in the Indian team need to play gain experience and the team should have a core pool of 25 players ready to play in the mega-event to be jointly hosted by Australia and New Zealand.

"I think it's too early to talk about the 2015 World Cup. Definitely the players are young and some of the players need experience. Each player needs to have played about 80-100 matches because that experience always helps you.

"I feel a player like Bhuvneshwar Kumar needs to play more matches so that by the time the 2015 World Cup comes I think we will have more experience.

"All the players have played good cricket. Whether it is (Suresh) Raina or (Ravindra) Jadeja or (Ravichandran) Ashwin, Rohit Sharma, Dinesh Karthik, all of them have played good level of cricket in the last two to three years. That experience will really help.

"Shikhar Dhawan has just come in as a new cricketer. He has done well but bowlers will try to come up with new ideas to get him out, so he needs to get more experience and play at least 70 to 80 matches before the 2015 World Cup.

"Dhawan has a good work ethic and works really hard. We need to get a good mix of 25 players who can be ready to play for India at any time.

"Now the set-up looks very solid. We have a good back-up. Some of the experienced players have been dropped now. Sehwag, Gautam Gambhir, Yuvraj can also walk in any time. It looks solid at the moment," he said. The former selector also praised Mahendra Singh Dhoni's leadership and hailed him as one of the best captains the country has produced

"Dhoni....he is so smart and reads the game well. He has got his own ideas and believes in his team and himself and that is what makes him a good captain. He has got plan A, plan B, plan C ready with him. He has a young team and he is backing them up. There is a daring in him and he takes chances.

Like his successor Dilip Vengsarkar had done, More hailed Dhoni as an outstanding finisher of a match.

"He is a finisher and comes to bat at number six or seven, which is the most difficult position. He is street smart and he reads the game well. He knows what is going to happen from the first ball till the fiftieth over. He knows all his equations and implements his plans well and that is why he is so successful," he said.

The former India stumper, however, brushed aside the idea of split captaincy for different formats as he felt Dhoni was leading the side extremely well.

"I don't think we need split captaincy at the moment. Dhoni is doing a brilliant job. I believe he is a captain who carries the team so well. All the players respect him. The way he has handled the Indian team in the last five to six years has been brilliant. For me he is one of the greatest captains India has ever produced," he said.

More, who was the chief selector when Dhoni was picked in the India A team for the Kenya tour almost a decade ago, said there was some opposition initially to pick the Jharkhand player as Deep Das Gupta, also from East Zone, was in contention for a place.

"There was some resistance. Deep Das Gupta was playing for East Zone. He had done well and had scored a century against England. But then it was a team decision. Sometimes you agree and sometimes you don't. At the end of the day everybody agreed to have Dhoni in the Kenya tour," he said.

Comments
Topics mentioned in this article
India vs Pakistan 2012 Cricket India Cricket Team Virender Sehwag Gautam Gambhir Shikhar Dhawan RG Sharma
Get the latest updates on IND vs NZ 2021, check out the Schedule and Live Score . Like us on Facebook or follow us on Twitter for more sports updates. You can also download the NDTV Cricket app for Android or iOS.