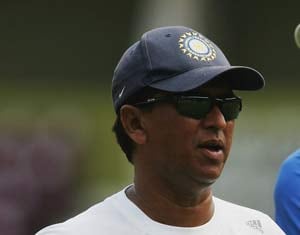 Former Test wicketkeeper Kiran More had not seen a Test match before touring the West Indies in 1982-83 with the Indian squad as understudy to Syed Kirmani.

"Being from a middle class family, I had never ever seen a Test match before that tour," said the Baroda-born player here last night.

The 50-year-old ex-chief selector was speaking at a prize distribution function organised by the MIG Club. He was the chief guest there.

More had to wait for three more years after that visit to the Caribbean islands to make his Test debut at Lord's against England in 1986, though he had by then played ODIs.

Narrating interesting anecdotes, More also said that he is a big fan of the Mumbai cricket.

More felt that Mumbai stalwarts like Sunil Gavaskar, Dilip Vengsarkar, Ravi Shastri, Sanjay Manjrekar and Zaheer Khan should share their rich experience and offer whatever guidance possible to youngsters to help sustain the quality of the city's cricket.

He also said his skills flowered when keeping wickets to the classical left arm bowling of veteran Mumbai spinner Padmakar Shivalkar who played only unofficial Tests for India.

"I once took the Virar fast train and, while getting down at Andheri station, realised that I had left my kit bag and shoes in the train," he remembered.

He had also played the role of a scorer on his first trip to the West Indies.

"I also played the role of a scorer as there was no one to keep the scores," he said, much to the amusement of the audience at the Bandra club.

"Though we both were competitors fighting for the same place, we had a great rapport which at times surprised our captain, the great Kapil Dev. On many tours we were room partners and we used to indulge in our trademark Tapori dance," he said.

Comments
Topics mentioned in this article
India vs Pakistan 2012 Cricket India Cricket Team Sunil Manohar Gavaskar Dilip Balwant Vengsarkar Ravi Shastri
Get the latest updates on India vs South Africa and check out  Schedule, Results and Live Score. Like us on Facebook or follow us on Twitter for more sports updates. You can also download the NDTV Cricket app for Android or iOS.