Sehwag has failed to fire in five consecutive Tests after getting a hundred against England in the opening game of the November-December 2012 Test series at Ahmedabad and has flopped in three successive innings in the ongoing four-match rubber against Australia. 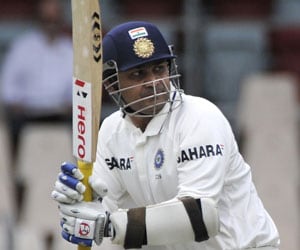 Former India selector Kiran More on Monday said the form of underperforming senior opening batsman Virender Sehwag was a cause for concern and the selectors may be inclined to give others a chance in the remainder of the Border-Gavaskar series.

"He is a quality cricketer. For me he is a great cricketer and a great opening batsman for India. He is not going through a great time. He is struggling. Most of the time the way he is getting out is alarming," said the former India stumper on the sidelines of a book release function here.

Sehwag has failed to fire in five consecutive Tests after getting a hundred against England in the opening game of the November-December 2012 Test series at Ahmedabad and has flopped in three successive innings in the ongoing four-match rubber against Australia.

"Looking ahead (another opener) Murali Vijay has done very well. Gautam (Gambhir) can comeback in the team and do well. Ajinkya Rahane is waiting and Shikhar Dhawan is there. We need to give opportunities to youngsters also."

"When you win and take 2-0 lead most of the captains and coaches don't like to change the team. It depends on the selectors also. But when you are looking ahead, you need to create opportunities for a lot of cricketers also like Murali Vijay. He has comeback strongly and got a brilliant hundred (in the ongoing second Test)," he said at the launch of book written by Shailendra Singh of event management firm Percept. More, however, said Sehwag still has a lot of cricket left in him.

"Viru started with middle order, he can always go back (to that position). But I feel Viru has a lot of cricket left and for me he is a specialist opener," More said.

On the ongoing India-Australia Test at Hyderabad, the former chief selector said the home team could win the series 2-1 or 2-0.

"I am very happy that Indian team has come back very strongly in this series. They have really prepared well and it shows in the performance. The best part is most of the players are performing. In the first match, I think six to seven guys performed and this Test match also (Cheteshwar) Pujara got a brilliant double hundred," he said.

"I think overall the team is looking good but we still need top work very hard on lot of areas. We need to work on the fast bowlers department. Bhuvneshwar (Kumar) has done very well in this match but we need 8-9 fast bowlers who can deliver the goods for Indian Test team, especially. I think we have a very good chance to win the series 2-0 or 2-1."

More felt the Australian spin attack lacked the requisite sting to trouble the strong Indian batting line up. "I think their spin attack is very weak. They are facing many problems. If they had quality spin attack, they would have done very well in this Test series."

Praising Pujara he said, "I have been watching him since 14-15. Cheteshwar Pujara has come in a good mold and the good news is that he made two double centuries in a short span. He can fill up Rahul Dravid's place if he works harder."

Flamboyant left-handed batsman Yuvraj Singh, who was present at the event, said he has also written a book which will be launched next month.

Comments
Topics mentioned in this article
Cricket India vs Pakistan 2012 India Cricket Team Australia Cricket Team Virender Sehwag India vs Australia 2013
Get the latest updates on ICC Women's Cricket World Cup 2022 and IPL 2022, check out the Schedule , Live Score and IPL Points Table. Like us on Facebook or follow us on Twitter for more sports updates. You can also download the NDTV Cricket app for Android or iOS.