Australia can become No. 1 in two years: Arthur

Australia's 0-4 drubbing in India was their worst result in the Indian subcontinent and the worst ever since losing 1-5 to England in the 1978-79 Ashes. 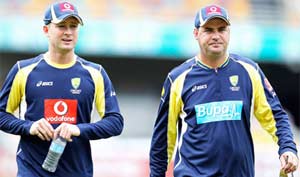 Australia cricket coach Mickey Arthur has said the tour of India was the toughest of his career but expressed confidence that his side can again become No. 1 in Tests in two years.

Australia's 0-4 drubbing in India was their worst result in the Indian subcontinent and the worst ever since losing 1-5 to England in the 1978-79 Ashes.

"I think we moved forward, moved in the right direction and hopefully this will be the foundation of something really good for the Australian cricket side. We've said it numerous times now; we could have carried on and been third in the world comfortably but we don't accept that, we want be No.1 in the world. We've put some stuff in place that we believe can get this team there in the next 24 months."

"Team harmony is fantastic. The players work extremely hard. We've got a really good group of young players who want nothing more than to make Australia the best cricket team in the world. It's a funny perception around Michael and Shane, they're different personalities, different characters but they get on really well. It's sometimes a media beat-up around Watto and Pup, they work really well together and always have. I haven't seen anything to dispel that," said the South African.

Arthur admitted he had concerns entering the tour of India due to the tough conditions.

"It's totally different conditions. I was always really worried about the conditions in India, especially with a group of young players. You can sit and you can tell players what it's like to play there but until you've experienced it, you don't comprehend it," Arthur said.

Comments
Topics mentioned in this article
Cricket India Cricket Team Australia Cricket Team John Michael Arthur India vs Australia 2013
Get the latest updates on IPL Auction 2023 and check out  IPL 2023 and Live Cricket Score. Like us on Facebook or follow us on Twitter for more sports updates. You can also download the NDTV Cricket app for Android or iOS.