The South African said he had no regrets at axing the players for the third Test against India for not doing a homework assignment designed to identify team weaknesses. 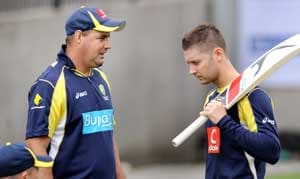 Australia coach Mickey Arthur insisted on Tuesday his contentious punishment of four players for not completing a feedback review had galvanised the team on their disastrous tour to India.

The South African said he had no regrets at axing the players for the third Test against India for not doing a homework assignment designed to identify team weaknesses.

Australia subsequently crashed in the series 4-0, causing gloom among fans over the team's Ashes hopes against England later this year.

Despite the heavy loss a defiant Arthur said he would do the same again and that the punishment had "pulled together" the team.

"If we had our time again, we'd do the same thing," Arthur told reporters upon his return home to Perth.

"These are line in the sand moments. It's been well documented. The team needed to just be pulled together, just a little bit.

"With representing Australia comes massive expectation, we all are very aware of that, and with that comes a lot of responsibility, so we've done it to make the players really aware of what that is and what is expected of them over the next 12 months.

"It's galvanised our team. Our team responded fantastically well."

Arthur said Watson had deserved the opportunity to captain Australia in the final Test in Delhi, despite being stood down for the previous match.

"He did the time and sort of paid the crime as they say, and came back when Michael couldn't captain as he was the vice-captain," Arthur said.

"He came back with a really good attitude," he added.

Arthur said despite the series savaging by India the experience of battling the tough playing conditions had brought the team closer together.

"Team harmony is fantastic," he said. "Honestly, the players work extremely hard. We have a really good group of young players who want nothing more than to make Australia the best cricket team in the world."

Despite being outplayed by MS Dhoni's Indians, Arthur said he did not envisage too many changes for the team when they take on England in July.

"We felt that we took the best players possible to India," he said.

"We know that they have a bit of experience and are going to be better for it."

Arthur said he was optimistic about Australia's Ashes chances but the team needed Clarke back to full fitness.

"We obviously want Michael to be at no risk at all for the Ashes or for the tour," he said.

Clarke returned home last weekend and said he was confident his back and hamstring issues would not keep him out of the Ashes tour.

Comments
Topics mentioned in this article
Cricket Australia Cricket Team India Cricket Team Michael Clarke Shane Watson John Michael Arthur India vs Australia 2013
Get the latest updates on IPL Auction 2023 and check out  IPL 2023 and Live Cricket Score. Like us on Facebook or follow us on Twitter for more sports updates. You can also download the NDTV Cricket app for Android or iOS.