Zaka Ashraf, who, since taking over as PCB chief in October 2011, has been making efforts to invite teams to Pakistan in a bid to revive international cricket. 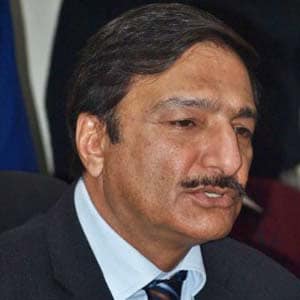 PCB chairman Zaka Ashraf has claimed that a tour by the Indian team to Pakistan had almost been finalised before the recent situation across the Line of Control (LoC) "spoiled everything".

Ashraf, who, since taking over as PCB chief in October 2011, has been making efforts to invite teams to Pakistan in a bid to revive international cricket here, said that he had held positive talks with the BCCI and government officials recently in India.

"I would like to disclose here that India's tour to Pakistan had almost been finalised after both PCB and BCCI held a series of useful meetings during the Pakistan tour," Ashraf told the 'Dawn' on Wednesday.

"We not only met the BCCI but also Indian government officials and were at a stage of giving practical shape to the tour. But the recent situation across the Line of Control spoiled everything," he claimed.

"But I believe that peace-loving people of both the countries should make joint efforts to defeat those elements who are trying to sabotage the peace process," he added.

The PCB chief also insisted that his act of sending get- well bouquets to late Shiv Sena leader, Bal Thackeray, before Pakistan went to India for the one-day series, was a gesture that was much appreciated by everyone.

Shiv Sena has been at the forefront of protests in India against allowing Pakistani sportsmen to play there in the wake of simmering tension across the LOC.

Ashraf said that Pakistan has been trying to convince India and Bangladesh to come here by adopting diplomacy to an extent where its national pride is not compromised.

"I do not feel hurt or disappointed by the setbacks in these campaigns and let me assure you that our efforts today will yield positive results for Pakistan in near future."

He felt that people's perception about Pakistan had changed after the attack on the Sri Lankan team bus in 2009.

He admitted that though it was not easy for families in foreign countries to send their loved ones here, the PCB was ready to offer the families of all players every kind of security besides USD 2 million insurance for each player.