A fit-again Ishant Sharma will return to action with the two cricket Tests against New Zealand, hoping a good show paves way for his selection in the shorter formats of the game. 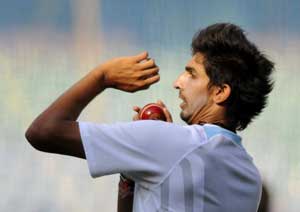 A fit-again Ishant Sharma will return to action with the two cricket Tests against New Zealand, hoping a good show paves way for his selection in the shorter formats of the game.

Ishant last played a Test match in January against Australia in Adelaide after which he underwent a much needed ankle surgery, forcing him out of the Indian Premier League (IPL).

After months of rehabilitation, the lanky fast bowler is now itching to get back on to the field.

"It is a crucial series for me. I have worked really hard on my fitness and the break has helped tremendously. When you are on tour, you tend to get lazy with your training, you don't get much time to prepare," Sharma told IANS.

The 23-year-old is India's most experienced pacer after Zaheer Khan and the team will be expecting him to fire on all cylinders.

Sharma knows bowling in sub-continent conditions is never an easy task but he has prepared well for the grind.

"As I said, I feel fully fit and have been bowling 10 to 12 overs a day at the National Cricket Academy (NCA). I followed a 10 a.m. to 5 p.m. schedule there and spent a lot of time in the gym and with the physios. I hope it pays off in the series and I am able to take wickets for India," said Ishant, recalling his stint at the NCA, Bangalore.

Ishant, who has been overlooked for the T20 side, said he would have loved to be part of the World Cup in Sri Lanka next month.

"I would be lying if I say I am happy playing just Test matches. I love to represent India in all formats and I am looking forward for a return with a good show in the New Zealand series," said Ishant, who last played an ODI in June 2011 and T20 International in December 2009.

New Zealand might have been humbled by the West Indies earlier in the month but Ishant expects them to bounce back against India.

"You can't take a team like New Zealand lightly. They have a habit of surprising and I am expecting a tough fight from them," he added.

The first Test starts in Hyderabad Thursday, followed by the second in Bangalore from Aug 31.