India vs England: Bhuvneshwar Kumar and Shardul Thakur shone with the ball as India beat England by seven runs in the third ODI to win the series 2-1. 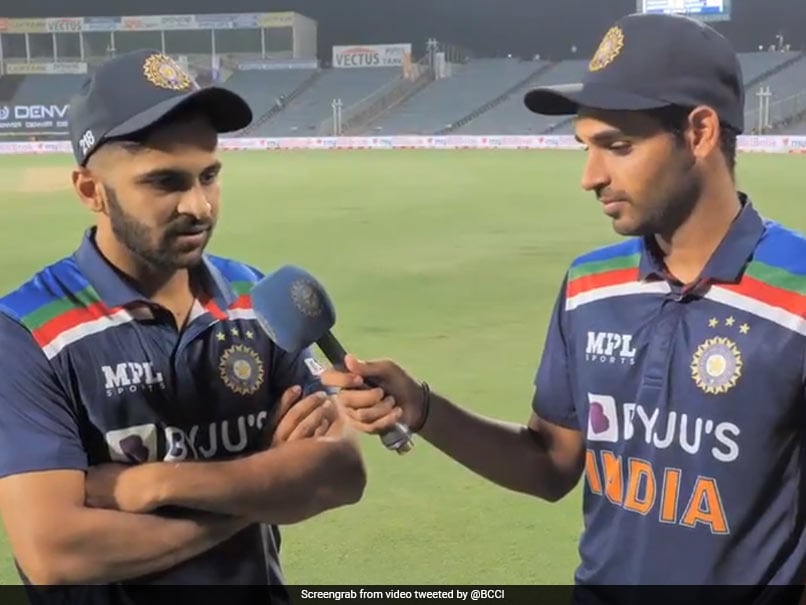 IND vs ENG: Bhuvneshwar Kumar and Shardul Thakur interviewed each other after the 3rd ODI.© Twitter

Pacer Shardul Thakur has said that it is important to take wickets at regular intervals against England as the Three Lions have a very deep batting lineup and they can hurt if there are wickets in hand. In the third ODI against England here at the Maharashtra Cricket Association Stadium in Pune, Sam Curran played an unbeaten knock of 95 but his innings went in vain as India registered a seven-run win in the third ODI to clinch the three-match series 2-1.

On the mic with @BhuviOfficial & @imShard

The two chat up about their bowling performance in the final ODI versus England, #TeamIndia's ODI series win, @imVkohli's stunning catch & more. - By @RajalArora #INDvENG @Paytm

At one stage, England was down and out at 200/7, but Curran changed the game with his brilliant batting.

However, T Natarajan defended 14 runs in the final over, and the hosts clinched the series. For the hosts, Shardul took four wickets while Bhuvneshwar Kumar returned with three wickets.

"When I came on to bowl, England had lost three wickets, Dawid Malan and Jos Buttler were batting and they were looking in good form and they were striking the ball well. My plan was to take wickets, their batting lineup is quite deep. With England's batting lineup, it is important to take wickets at regular intervals. It is difficult coming into bowl as one change or the second change," Shardul told Bhuvneshwar Kumar in a video posted on the official website of BCCI.

"When the ball gets old, it does not swing much and you have to extract something from the pitch by using cutters or bouncers. You have to try different balls, if you think about the strength of England's batting, they will hit you but if you think that a dot ball or wicket ball can be bowled, then it will help you and this is the right mindset," he added.

"Virat Kohli took a stunning catch, at that time, we desperately needed a wicket. I am happy that Rashid's wicket came of my bowling but Virat took a blinder of a catch," Thakur told Bhuvneshwar.

Talking about his performance, Bhuvneshwar told Shardul: "I was trying to swing the ball, in the first over, Jason Roy scored boundaries of good balls, luckily I was able to dismiss Roy in the very first over and the momentum changed after that. Experience always helps, I have learnt that you change the field setup to disturb the batter, these small things I have learnt. To be honest, it was a very challenging series, we knew England has a strong batting lineup. It was a tough series for the bowlers, but in the end, it was a perfect series for us."

Earlier, India's batting unit displayed a change of approach in the third ODI and this ensured that despite losing wickets at regular intervals, the hosts posted a total of 329. Rishabh Pant (78), Hardik Pandya (64), and Shikhar Dhawan (67) registered 50-plus scores as India set a 330-run target for the visitors.