India vs England: Prime Minister Narendra Modi shared a picture of the MA Chidambaram Stadium on Twitter on Day 2 of the second Test. 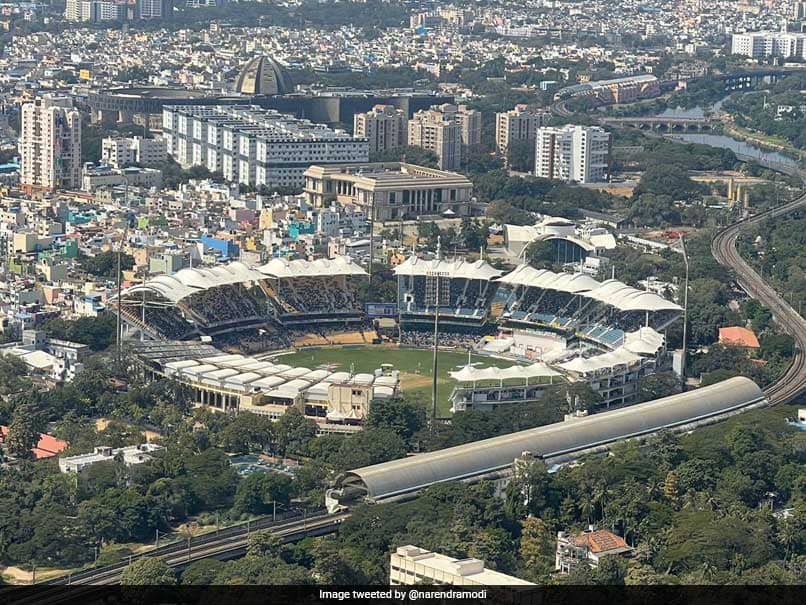 Prime Minister Narendra Modi during his visit of Chennai, where he is slated to open a series of infrastructure projects, took to Twitter to share an aerial picture of the MA Chidambaram Stadium - popularly called the Chepauk - amid the ongoing second Test between India and England on Sunday. "Caught a fleeting view of an interesting test match in Chennai," PM Modi wrote along with the picture of the stadium, adding a bat-and-ball emoji as well as flags of India and England.

Caught a fleeting view of an interesting test match in Chennai. pic.twitter.com/3fqWCgywhk

PM Modi also recently praised Team India's exploits in the Test series against Australia, where they came back from behind and fought injuries to win the four-match series 2-1.

"This month, we got good news from the cricket pitch. After initial hiccups, the Indian team bounced back gloriously and won the series in Australia. Our team's hard work and teamwork was inspiring," PM Modi said during his 'Mann Ki Baat' radio programme in January.

In the ongoing second Test, India posted 329 after winning the toss and choosing to bat. Rohit Sharma scored 161 in an attacking knock, while Ajinkya Rahane and Rishabh Pant chipped in with crucial half-centuries.

Ravichandran Ashwin then took his 29th five-wicket haul in Tests as England were bowled out for 134.

India are looking to level the four-match series, after losing the opening match - also played at the same venue - by 227 runs.