India vs England: With the 4th and final Test of the series to be played in Ahmedabad from Thursday, the Indian team is going through its drills in earnest. 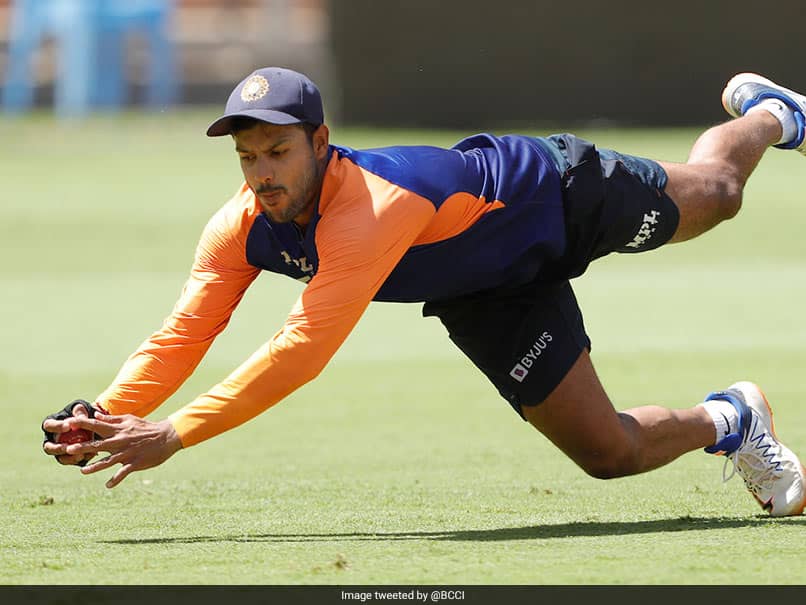 IND vs ENG: Mayank Agarwal dives to catch the ball during training.© Twitter

The Indian cricket team is gearing up for the fourth and final Test in the ongoing series against England in Ahmedabad. Although India are leading the series, there is plenty on the line for the hosts in the final game, as they look to book their berth in the final of the inaugural edition of the World Test Championship in June. The Indian cricket board on Tuesday took to social media to share pictures as the team underwent some fielding drills ahead of the fourth Test.

In the pictures, batsman Mayank Agarwal, pacer Umesh Yadav and spinner Kuldeep Yadav can be seen practicing catches, while all-rounder Washington Sundar is seen throwing the ball at the stumps.

While Sundar and Kuldeep have both featured for the team in the series so far, Mayank Agarwal and Umesh Yadav have not found a way into the side yet.

Umesh Yadav was ruled out of the first two Tests as he was recuperating from an injury picked up during India's tour of Australia but was added to the squad for the final two games after he cleared his fitness test.

He may get the nod in the final Test, after pace spearhead Jasprit Bumrah pulled out citing "personal reasons".

India need to either win or draw the match at the Narendra Modi Stadium to qualify for the WTC final against New Zealand.

If England - who themselves were knocked out of contention after defeat in the third Test - win the match, then Australia will go through to the decider at Lord's.

Kuldeep Yadav Mayank Agarwal Washington Sundar India vs England, 4th Test Cricket
Get the latest updates on IPL 2021, IPL Points Table , IPL Schedule 2021 , live score . Like us on Facebook or follow us on Twitter for more sports updates. You can also download the NDTV Cricket app for Android or iOS.