India vs England: India Face Problem Of Plenty As They Look To Pick Team For England T20I Series

India vs England: India will be looking to find their best combination during the T20I series against England, with the T20 World Cup at home later this year. 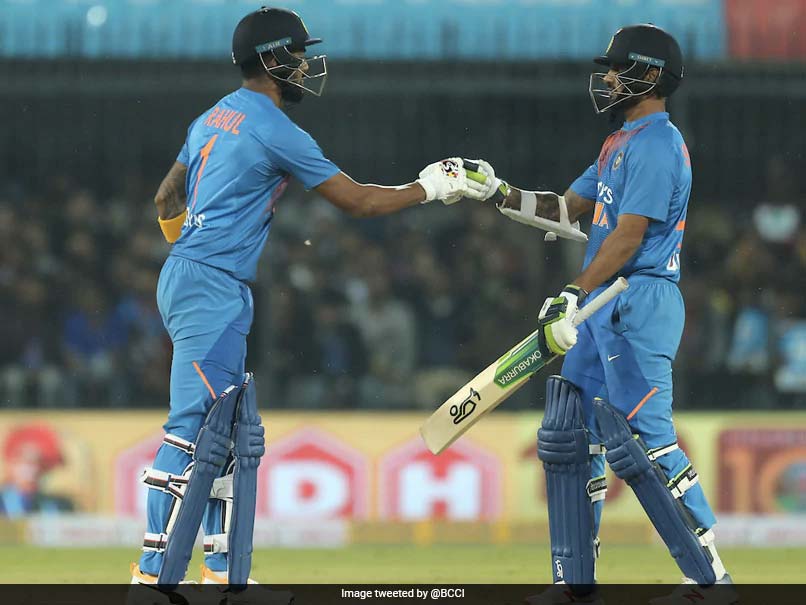 IND vs ENG: India will have to choose between Shikhar Dhawan and KL Rahul to partner Rohit Sharma up top.© Twitter

The Indian team management faces a problem of plenty going into the five T20 Internationals against England, an assignment which marks the beginning of the side's build-up to this year's T20 World Cup at home. There are 19 players available for selection and with two in contention for each slot, the XI for the five games, starting in Ahmedabad on Friday, will be an indication to how head coach Ravi Shastri, captain Virat Kohli and bowling coach Bharat Arun are looking at the next six to seven months for the shortest format.

Will they look for a settled combination to first clinch the series and then experiment or will they field absolute rookies in the squad looking at the bigger picture?

For a team that's so closely followed, the result does matter and that's why one can expect a settled first eleven for the first three games since all matches are at the same venue on similar kind of tracks.

The roaring comeback of Rishabh Pant will lead to a lot of interesting developments at the top of the order.

Pant's inclusion means that KL Rahul, who till a few months back was the first choice keeper-opener, is unlikely to don the big gloves.

Shikhar Dhawan and Rohit Sharma were a settled white ball opening pair till recently but Rahul's emergence as a potent white ball specialist has spiced up the competition.

Dhawan recently had a score of 150-odd in the Vijay Hazare Trophy for Delhi and when it comes to Rohit, there's nothing to be discussed.

So where does the team management fit in Rahul, who has been a successful IPL opener? Will he be slotted in the middle-order as Dhawan's game is not suited to batting lower down?

These are two pertinent questions and in the answer, will be a follow-up question.

With skipper Kohli himself coming in at No 3 and two game-changers like Pant and all-rounder Hardik Pandya expected to play the big shots at Nos 5 and 6, where does it ideally leave Rahul?

The only place he can be slotted is No 4 but Shreyas Iyer and Suryakumar Yadav are also jostling for a place.

If one closely follows the pattern of picking the playing XI, Surya, a sentimental favourite, will have to wait for his turn as Shreyas has done nothing wrong.

But when it comes to a three-way battle between Rahul, Shreyas and Surya, the Karnataka man beats the two Mumbai boys hollow with his repertoire of strokes and ability to shift gears.

Similarly, in the pace department, Bhuvneshwar Kumar, once upon a time India's best white ball exponent, is coming back after a long lay-off and will be engaged in a two-way fight with Deepak Chahar and Shardul Thakur.

For Bhuvneshwar, his experience and being a better bowler at the death compared to Chahar holds him in good stead but he hasn't played a lot of cricket save a few Mushtaq Ali games.

Ditto for Chahar, a potent outswing bowler but more of a one-trick pony with lack of variations during the back-10.

Shardul is a crafty bowler who can swing it at brisk pace and among the three can use the long handle to the best effect.

Yuzvendra Chahal, Washington Sundar and Axar Patel are the three spinners expected to feature in the playing XI on the sluggish Motera tracks.

In another three-way fight, Thangarasu Natarajan, with his variation of yorkers, stands a better chance to start off compared to Navdeep Saini.

Two players, who will only get a look-in if someone is injured or forcefully rested are Ishan Kishan and Rahul Tewatia as the two simply can't be fitted anywhere.

In all, there are too many good players and very little space to fit all of them with three sure-shot picks -- Mohammed Shami, Ravindra Jadeja and Jasprit Bumrah already resting or recuperating from injury.

Once they come back, it will be a bigger selection headache for the management but one that they won't mind.

Shikhar Dhawan Suryakumar Yadav Shreyas Iyer Cricket
Get the latest updates on ICC T20 Worldcup 2022 and CWG 2022 check out the Schedule, Live Score and Medals Tally. Like us on Facebook or follow us on Twitter for more sports updates. You can also download the NDTV Cricket app for Android or iOS.