India vs England: Eoin Morgan said England will learn from playing on slower pitches ahead of the T20 World Cup in India later in the year. 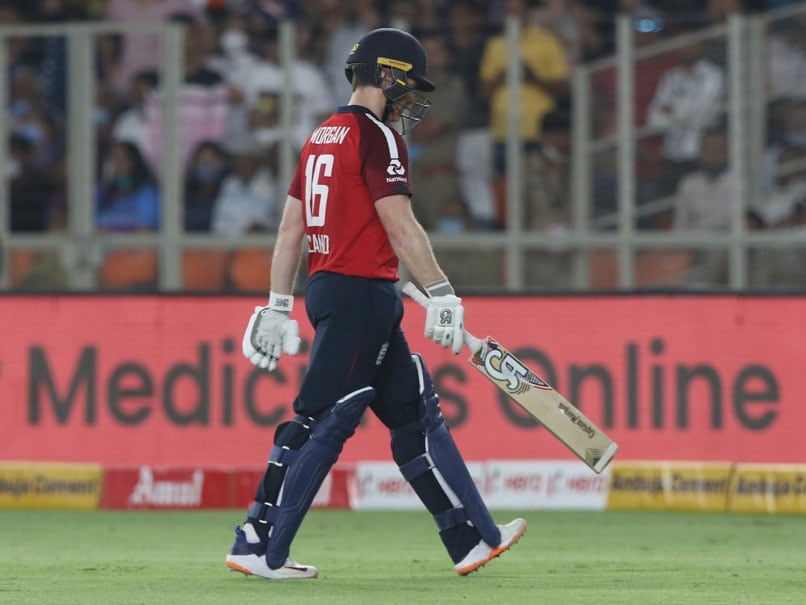 IND vs ENG: England batsmen failed to put up a big total in the second T20I against India.© BCCI

India have exposed England's "weakness" in handling slow conditions but competing here will only prepare them well for the Twenty20 World Cup, feels captain Eoin Morgan. India drubbed England by seven wickets in the second T20 International (T20I) to level the five-match series 1-1 on Sunday night. Morgan admitted they struggled to get used to the slow surface used for the second match. "I suppose the difference was in the wicket we played and how we adapted. It was different wicket from the one we batted in the first game. The pitch was slow and low and one thing that does is expose our weakness on these surfaces a little bit," said Morgan at the post-match virtual media interaction on Sunday night.

"We don't play a lot on slow, low wickets and the more that we can do that, the better. You only become better in these conditions by playing in them and making mistakes."

The English skipper, however, said playing in such tough conditions ahead of the ICC World T20 later this year in India, will only help them.

"I thought the other night, the pitch really suited us because it had more pace in it - similar to a wicket at home, a Cardiff wicket or somewhere like that, that was a little bit uneven and maybe stood up a little bit."

"But this took us out of our comfort zone and really was a typical Indian wicket that we would play on in an IPL game. Again, your accuracy has to be on," Morgan said.

"You tend to learn quicker if you're winning and confident and everything goes reasonably smoothly - you can integrate the learning quite quickly - but equally, if we have to learn the hard way, we're still going through that process of trying to learn game-on-game so when it comes to the World Cup in seven months' time, we can be as best prepared."

Morgan said England were below-par in all departments of the game on Sunday, compared to their eight-wicket win in the series opener.

"We did a lot of the structure of our innings really well. I thought we were right in the game, we established partnerships and got to the point where we tried to accelerate but managed to lose wickets at different stages," he said.

"I thought we could have been a bit more accurate in the lines and lengths that we bowled. When we went back to the basics of taking pace off the ball, we didn't do that well enough."

"Your accuracy has to be on as you are bowling to guys on their home patch so the bowlers are up against it. India managed to get away from us quite quickly."

Morgan had words of appreciation for young Ishan Kishan, who scored a 32-ball 56 on his international debut.

Kishan and skipper Virat Kohli shared 94 runs for the second wicket to chase down England's modest 164 for 6 with 13 balls to spare.

"Taking an early wicket was brilliant but India managed to get away from us quite quickly. Ishan Kishan played pretty well and managed to take the game away from us, and everything that we tried didn't seem to work," Morgan said.

The third match of the series will be played on a red soil pitch and Morgan feels spinners will definitely come into the picture on Tuesday.

"The next game is on the red soil that looks like Ayers Rock so it's probably going to turn," Morgan said.

"These are the challenges that we want to play against. Regardless of how we do in the series we want to learn as much as we can and get that experience under our belt for the World Cup."

"Because we're playing on a different type of soil, on the red soil not the black soil, there's a chance that it might take more spin."

"The two wickets we've played on have not turned. We looked at them and didn't expect them to turn, but potentially, the next game might offer a little bit for the spinners."

Morgan expects Mark Wood to be fit for the next game after he missed the second T20 due to a bruised heel.

"His injury is not a big worry. He felt better again today but not fit enough to play," he said.

"Hopefully he'll be available for the game in two days' time, but if not, the fourth match."

Eoin Morgan Cricket
Get the latest updates on SA vs IND 2021-22, check out the Schedule and Live Score . Like us on Facebook or follow us on Twitter for more sports updates. You can also download the NDTV Cricket app for Android or iOS.