India vs England: Joe Root, who scored an unbeaten century, was struggling with cramps when Virat Kohli came to the aid of his counterpart in Chennai. 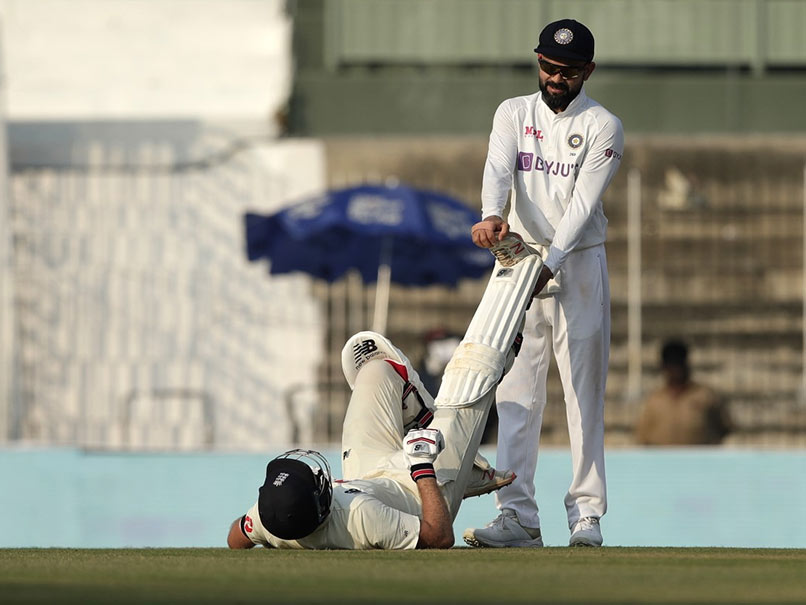 Virat Kohli helped out Joe Root on Day 1 of the first Test as England skipper struggled with cramps.© BCCI

Virat Kohli won hearts on Day 1 of the first Testbetween India and England in Chennai on Friday with his gesture for Joe Root in the final session of the day. Root, who scored a century in his 100th Test, was struggling with cramps and as he hit Ravichandran Ashwin for a six in the 87th over, he fell down on the ground. Kohli soon rushed towards his counterpart and helped Root to stretch his leg, much to the relief of England skipper. Kohli's gesture earned him a lot of praise on social media.

The Board of Control for Cricket in India (BCCI) posted a video on Twitter of the incident, hailing Kohli for his sportsmanship.

"#SpiritOfCricket at its very best," the BCCI captioned the video and tagged Kohli.

Proud of you @imVkohli

In the match, Root won the toss and opted to bat in the Test series opener against India.

The hosts managed to pick two wickets in the first session but England dominated the rest of the day on a pitch that did not offer any help to the bowlers.

Root scored a fine unbeaten century and stitched a 200-run stand for the third wicket with Dominic Sibley.

In the final over of the day, Jasprit Bumrah, playing his first match on home soil, removed Sibley to end the day on a positive note for the hosts. Sibley fell 13 short of a hundred.

England finished the day at 263 for three with Joe Root not out on 128.

Virat Kohli India vs England 2020-21 India vs England, 1st Test Cricket
Get the latest updates on IPL 2021, check out the IPL 2021 Schedule and Indian Premier League Live Score . Like us on Facebook or follow us on Twitter for more sports updates. You can also download the NDTV Cricket app for Android or iOS.