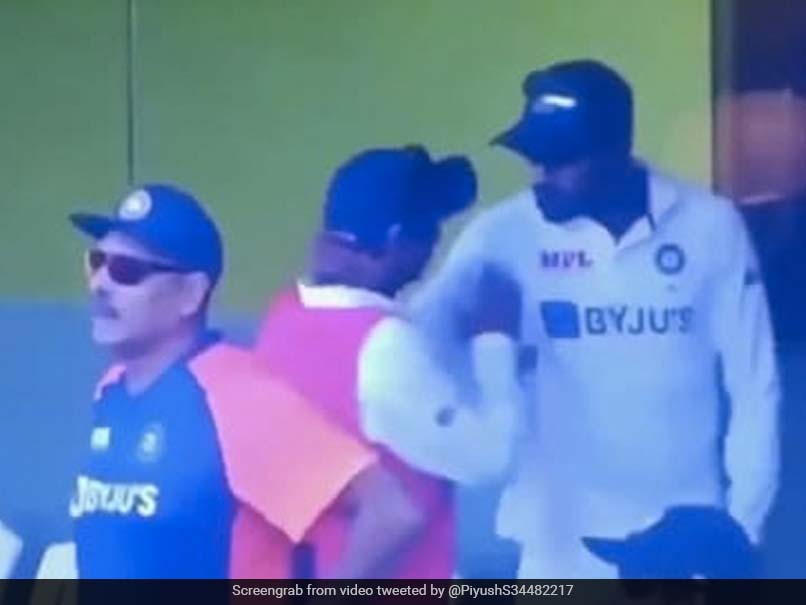 Two Team India members were spotted having an interaction after Stumps on Day 1.© Twitter

A video is doing rounds on social media in which members of Team India can be seen involved in an animated interaction after Stumps on Day 1 of the ongoing first Test in Chennai. Some fans suggested that the two involved in the viral video are Kuldeep Yadav and Mohammed Siraj but the video is not clear. On Friday, India had a long day in the field after England won the toss and asked the hosts to bowl on a flat surface at the MA Chidambaram stadium.

Here is the video of the animated interaction between two Team India members:

Fans were left mystified after watching the viral video on social media.

@BCCI please tweet on episode between Siraj and Kuldeep as we would like to know what actually happened between the duo, hope nothing to worry.

In the ongoing Test match, England tightened their grip on the contest after reducing India to 257 for six at the end of Day 3.

England had posted a mammoth first innings total of 578 thanks to a double century from their captain Joe Root, who marked his 100th Test match with a knock of 218.

Root received ample support from Dominic Sibley and Ben Stokes as both batsmen scored half-centuries to put England into a commanding position.

In reply, India got off to a poor start as the hosts lost the wicket of Rohit Sharmain the fourth over.

Shubman Gill also failed to convert his start into a big score as he chipped one to James Anderson at mid on, who took a fine catch diving forward. Jofra Archer accounted for both wickets.

Dom Bess then removed Virat Kohli and Ajinkya Rahane in quick succession to leave India tottering at 73 for four.

Rishabh Pant and Cheteshwar Pujara hit half-centuries to rescue India but both batsmen lost their wickets, trying to take on the England off-spinner.

England Cricket Team India vs England 2020-21 India vs England, 1st Test Cricket
Get the latest updates on Fifa Worldcup 2022 and check out  Fifa World Cup Schedule, Stats and Live Cricket Score. Like us on Facebook or follow us on Twitter for more sports updates. You can also download the NDTV Cricket app for Android or iOS.