Wicket has slowed down and first session tomorrow will be crucial, says Pragyan Ojha

"I am pretty pleased by taking a five-for against England in the first innings. They are a top side and are no 2 ranked in the world. But this is a long series and a lot of work needs to be done," Pragyan Ojha said. 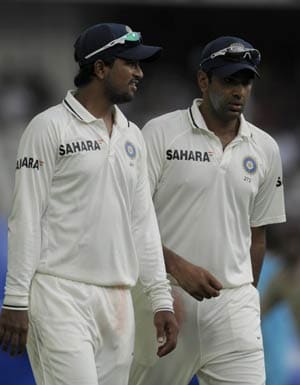 Having starred with a five-wicket haul, India's left-arm spinner Pragyan Ojha said that the first session of play on Sunday would be crucial to the outcome of the first cricket Test against England.

"The first session would be crucial. It will set the tone for the rest of the game. We need to get quick wickets," said the 25-year-old, who bagged five for 45 to bowl out England for 191 in the first innings, prompting India to follow-on.

Thanks to Ojha and off-spinner Ravichandran Ashwin's three for 80, India took a huge 330-run first-innings lead.

However, England, following on, fought back strongly by making 111 without losing a wicket in the second essay.

Alastair Cook led the way with an unbeaten 74, though the tourists are still 219 runs behind.

Ojha, who is playing in his 17th Test, said he was pretty pleased to take a five-for -- his fourth in this format --against a top team like England.

"I am pretty pleased by taking a five-for against England in the first innings. They are a top side and are no 2 ranked in the world. But this is a long series and a lot of work needs to be done," he said.

Ojha said the wicket had slowed down a bit and also lacked the bite it had on the first two days.

"The wicket has slowed down and the bite that was there is missing. As I said the first session tomorrow is crucial," Ojha reiterated.

Ojha, who came to the post-day media conference with his right elbow bandaged, said the injury was not serious. He had banged against the advertisement hoarding on the boundary line while fielding and hurt his joint.

He said he was happy to get the wicket of England's top batsman Kevin Pietersen, who was clean bowled.

"KP is a very good batsman and has scored lot of runs. I am happy to get him out. The key was to bowl in the right areas and allow the wicket to do the rest," Ojha remarked.

Comments
Topics mentioned in this article
Cricket Pragyan Ojha India vs England 2012 Ravichandran Ashwin England Cricket Team India Cricket Team
Get the latest Cricket news, check out the India cricket schedule, Cricket live score . Like us on Facebook or follow us on Twitter for more sports updates. You can also download the NDTV Cricket app for Android or iOS.