Umpiring in modern cricket: Nothing 'official' about this

Technology can be very useful and life-changing, but, at some level, it can also be stunting. So it is with international umpiring at the moment - at least on the evidence of the India vs England Test in Ahmedabad. 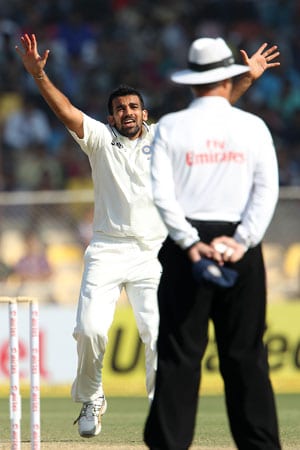 Once upon a time, we remembered the phone numbers of people we spoke to regularly, 'mental math' was common - we could add and subtract fairly big numbers quickly in our heads. We could write; more power to the pen actually referred to pens. Cut to the mobile phone-computer era and life has clearly changed. Technology - very useful and life-changing, but also, at some level, stunting.

So it is with international umpiring at the moment - at least on the evidence of the India vs England Test in Ahmedabad.

With their rose-tinted glasses firmly on, people from another era will talk about how good everything was then. I am not in a position to compare or comment. But I do remember Dickie Bird, in his last Test, giving Sourav Ganguly not out when he was caught in the slips off his shoulder against England. Everyone thought it was out. Replays, till a last defining one was pulled out, were also inconclusive. But Dickie was adamant. He shook his head, wizened face looking characteristically crabby, shook his head again when the appeals persisted, and then assumed the angry school-dean posture that came so easily to him - get on with it, he seemed to say, or else...

Times have changed. Despite resistance from some quarters, technology has come into the game in a big way. If it hasn't taken over completely, we have resistance from primarily one quarter - the BCCI - to blame or thank, depending on your position on the matter. Whether that stance is good or bad is moot, what isn't is that umpiring standards have slipped.

It's like this. The idea behind bringing the third umpire into play was to help the on-field umpires get decisions on run outs and stumpings, among other things, right. But within days of the technology being approved for use, every run out or stumping appeal was being referred to the third umpire. So much so, that players have been known to appeal knowing fully well that the batsman is not out - possibly for a breather. The umpire, you see, will almost always make that virtual rectangle gesture and waste a minute or two. Essentially, umpires don't want to take a risk at all, and no longer exert themselves over these modes of dismissal.

Watching Tony Hill and Aleem Dar in action in the Ahmedabad Test suggested to me that umpires - at least the two in question - will (or could) now move on to reviewing every single leg before wicket decision. Given that the Decision Review System is in operation in most bilateral cricket series, Messrs Hill and Dar appear to have happily wiped their memories clean of Spot-the-LBW training.

Sometimes, an umpire is unsure of where exactly the ball had pitched, the turn, the direction (going down the leg-side, going over the stumps), and decides in favour of the batsmen, giving him the benefit of the doubt (Samit Patel would disagree). But deliveries that fitted every description of a leg before dismissal were brushed away in Birdesque manner in Ahmedabad when - no, replays were not needed at times - the batsmen looked plumb.

Twitter was instantly alight with debate - some plugging for the DRS (criticising the BCCI - justifiably, to my mind), others expressing dismay, or defending the umpires, and then there were those who saw the farce in it all. To me, though, there was a much simpler matter to consider: that these 'elite' umpires were inefficient, inept. And you know what? I don't think it's their fault entirely.

Admittedly, umpires have among the toughest jobs out there. That's why there are grades of umpires - the best make the Elite Panel. The ones here are expected to be just that - elite. But an excessive awe of technology has clearly addled the minds of some of these gentlemen.

Technology must, therefore, either become all-pervasive (ICC must lay down the law, ignoring individual dissenters) or be taken away altogether. Either umpires must have all the support they can get and be asked to make only the basic decisions, or they must be as good as they were expected to be in the old days, before their competence became an optional matter. Right now, they are up the creek without a paddle - expected to make certain decisions in series involving India (it must seem like a punishment posting to many) and then rely on the Third Umpire for the next three-four series where DRS is in operation.

It's simple. If you've given the man a mobile phone and a computer, let him keep the gadgets. Don't take them away once in a way - it's stunting.