While Kapil wants Pujara to carve a space out for himself rather than get compared, Ajay Jadeja is impressed with the youngsters' hunger for runs. 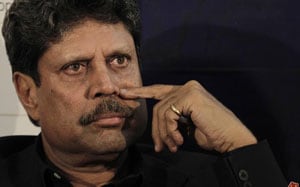 Former India captain Kapil Dev on Friday heaped praises on double centurion Cheteshwar Pujara but said it was too early to say that the Indian team has found Rahul Dravid's replacement in him.

"He has just started. He has shown great temperament but you cannot compare him with Rahul so early. Let him make his own position in the team and name for himself. It is unfair to put him under pressure and say he is the replacement of so and so," said the 1983 World Cup winning captain.

"Rahul gave 15 years to cricket and then became what he is," added Kapil.

Another former skipper, Ajay Jadeja, said he was impressed with Pujara's hunger for runs.

"What stands out for me is someone who is not content. Pujara even after completing his hundred, worked hard to get to the double century. He is showing he wants to get better, and thats a good sign," said Jadeja.

Besides Pujara, Yuvraj Singh, playing his first Test since recovering from a rare germ cell cancer, was the other notable performer on the third day of the opening Test today against England. He scored a fluent 74.

But Kapil felt that the talented left-hander should take care of his health first.

"He is one of the finest cricketers and he has a long way to go but he must look after his health first and then he can go on playing," said Kapil.

Asked if Yuvraj can sustain this kind of form for long, Jadeja said it was not for anyone else to say or decide but for the player himself.

"Cricket is very simple... you play till you can sustain. You play as long as you are good enough and Yuvraj himself will say whether he is good enough to sustain for whatever number of years.

"Right now Yuvraj is making a statement and it is not important whosoever is saying what," insisted Jadeja. On the Ahmedabad pitch, which is tailormade for the Indians, Kapil said the goal is to win the Test.

"You must win a Test match and that is important. India must see what is their biggest strength and they should play to that.

"But in domestic cricket the wickets should improve. That must be monitored," Kapil said on the sidelines of the 'HT Leadership Summit'.

Asked about Andhra Pradesh High Court's decision to uphold BCCI's life ban imposed on Mohammad Azharuddin, Kapil said, "I am nobody to say anything on that. Law is law. But it would be good if he comes back and shares his cricketing knowledge with the youngsters."

Comments
Topics mentioned in this article
Cricket Rahul Dravid Ajaysinhji D. Jadeja India vs England 2012 Cheteshwar Pujara Ramlal Nikhanj Kapil Dev
Get the latest Cricket news, check out the India cricket schedule, Cricket live score . Like us on Facebook or follow us on Twitter for more sports updates. You can also download the NDTV Cricket app for Android or iOS.