To beat India we have to do what no English side has done recently, says Alastair Cook

The visitors lost both their warm-up games ahead of the series to India 'A' and Delhi and Cook admitted it was not the kind of start they had wished before the series. 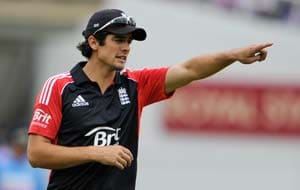 Despite a dominant Test series victory over India a few weeks, England skipper Alastair Cook is wary of the hosts, saying the players of his "underdog" side will have to play out of their skins to repeat success in the One-day series, beginning on Thursday.

"Clearly we are the underdogs in this series but if you look through our side we have got a lot of firepower and world class players. For us to win this series, those world class players and everyone in our squad have to play out of skin," said Cook ahead of the series-opener at the newly built Saurashtra Cricket Association Stadium in Kandheri.

The England skipper, who had led his team to a Test series triumph in India after 28 years at the end of 2012, said the team was lacking a bit in experience due to injuries to key members.

"We have got an inexperienced side, a few experienced players missing through injuries and rotational policy. It's quite similar to probably the squad that we had last time. So, it will be a real big test to us as players and real good test to these guys who have been around now a bit in international scene to try and step up."

The visitors lost both their warm-up games ahead of the series to India 'A' and Delhi and Cook admitted it was not the kind of start they had wished before the series.

"For us to win, I think, it showed the challenge we are going to have in our hands. Our skill levels will need to improve a lot. Yeah, it's going to be hell of a challenge like the Test series in a way. We have to do something that no English has done for a while," said the left-handed opener.

Cook said the margin of error for the bowlers on Indian wickets was minimal as compared to home environs.

"In these conditions there is very little margin for error. We found that out the last time we were here and in those two warm up matches. Maybe in English conditions where the ball nips around a bit with both the white balls early on, you can afford to leave that margin for error.

"But here, you get punished if you are off-line and length. So that's tough on bowlers in these conditions We got to try and keep those freebies down as much as you can," said the England skipper who was in sublime form with the bat in the Test series that his side won 2-1.

He said grabbing early wickets would always be a very important factor for putting pressure on the opposition.

"I think any time in international cricket, early wickets is the key. If you get early wickets, you are in good position. In the first two games, there was a bit of rustiness and there was a lack of rhythm to the bowling. We couldn't manage to put pressure on the opposition and they got off to good start."

Asked about the new ODI rules about field restrictions, Cook said in Indian conditions the rules would not have the same kind of impact as would be the case at home or in Australia.

"I think in these conditions, these rules will have less of an impact than say in Australia or England on bouncier pitches. I captained the other day (against Delhi) and having five men up (inside the striking circle at all times) was obviously different. And it's tough to bowl on these wickets, there is always a boundary option with the other man up."

Asked about absence of opener Virender Sehwag from the Indian line-up, Cook said though he was a dangerous batsman there seems to be enough talent in the home ranks.

"Sehwag is a very dangerous player, he is very hard to bowl at. He is not here but there is a lot of talent in Indian cricket," said Cook.

Comments
Topics mentioned in this article
Cricket India vs England 2012 India Cricket Team England Cricket Team Alastair Cook
Get the latest updates on India vs South Africa and check out  Schedule, Results and Live Score. Like us on Facebook or follow us on Twitter for more sports updates. You can also download the NDTV Cricket app for Android or iOS.