Sniffer dogs, anti-sabotage checking and bomb squad would conduct freqent checking inside the stadium, he said, adding, as part of integrated security system, about 50 cameras would be installed at the stadium. 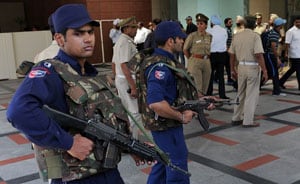 Foolproof security arrangements have been made around the recently refurbished Jawaharlal Nehru International Stadium here, which will host the second ODI between India and England, a top police official said.

Inspector General of Police (IG) K Padmakumar on Sunday visited the stadium along with other top police officials and Kerala Cricket Association (KCA) secretary T C Mathew and saw the preparations, which were in the final stages.

The security would be taken care by police force both inside and outside the stadium during the match, Padmakumar said.

Sniffer dogs, anti-sabotage checking and bomb squad would conduct freqent checking inside the stadium, he said, adding, as part of integrated security system, about 50 cameras would be installed at the stadium.

Traffic management was going to be a challenge since there will be an increase of 25 to 30 per cent vehicles in view of the Sabarimala Makaravilakku festival. The Ayyappa devotees would be returning to their home after the makara vilaku on Monday, he said.

Spectators could carry drinking water inside the stadium, he said, adding that they should avoid carrying large carry bags to the venue.

Inflamable items will not be allowed inside and spectators should also avoid umbrellas, he said.

Comments
Topics mentioned in this article
Cricket India vs England 2012 England Cricket Team India Cricket Team KER
Get the latest updates on ICC T20 Worldcup 2022 and CWG 2022 check out the Schedule, Live Score and Medals Tally. Like us on Facebook or follow us on Twitter for more sports updates. You can also download the NDTV Cricket app for Android or iOS.