The Importance of a No.3

The decision to pick Cheteshwar Pujara for the one-dayers against England means that he is now expected to fill yet another pair of Dravid's shoes. It means that the No.3 slot is taken care of, and should be for a while. Mahendra Singh Dhoni's reluctance to bat in that position is understandable, even if he ought to come higher than his current batting position at No.6. Yet in the first decade of the game, India stumbled upon tactics that are seen today as modern and contemporary. Although medium-pacers (known in those days as 'military medium' for being efficient rather than sharp, and correct rather than flamboyant) flourished, it was the bowling of Bishan Bedi and S Venkatraghavan that suggested an Indian alternative to the prevailing doctrine. Spin mattered, even in a one-day game.

Then there was the issue of split captaincy. In the 1980s, Sunil Gavaskar led in Tests and a young allrounder named Kapil Dev took over in one-dayers. Yet, Gavaskar's was a crucial presence at the top of the order. It was his superb 90 in Berbice, Guyana, which paved the way for India's first-ever win over the great West Indies, a team that had won the first two World Cups. Gavaskar made only one century in the short format which he disliked, yet he played important roles in many victories, anchoring the team. As Mike Brearley says in his book on captaincy, a cricket team works by the dint of differentiation. You cannot have all strokeplayers or all left-hand batsmen or only offspinners in your line-up.

And while the strokeplayers batted around Gavaskar, the team thrived. In the 1983 World Cup which India won, Mohinder Amarnath played a key role at No.3. As Man of the Match in the semifinal and final, he brought to the batting a stability that made the difference.

It was an important lesson. And once Rahul Dravid established himself as a limited-overs player of the highest class, India had long periods of superiority in the world game. Dravid was the load-bearing pillar that held up the middle order which was full of strokeplayers. It made the job of people like Sachin Tendulkar, Sourav Ganguly, VVS Laxman, Yuvraj Singh, and others that much easier. The guilt-free, attacking batsmanship was set off by the sight of Dravid at the other end, which spoke of security and stability.

The recent defeats against Pakistan have shown just how much India continue to miss Dravid. This time, Dravid the ODI player, the man with more than 10,000 runs in that format too.

The decision to pick Cheteshwar Pujara for the one-dayers against England means that he is now expected to fill yet another pair of Dravid's shoes. It means that the No.3 slot is taken care of, and should be for a while. Mahendra Singh Dhoni's reluctance to bat in that position is understandable, even if he ought to come higher than his current batting position at No.6. He has the 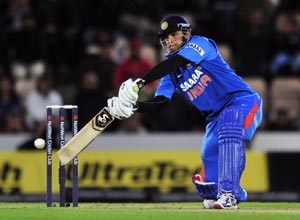 best batting average among Indians, and can control the game from wherever he bats. It's just that a promotion means he will have more deliveries to play with.

The next World Cup is over two years away, and even if it is possible to work out those who will not be playing for reasons of age, it is not so easy to figure out who will actually do so.

At some point late in 2009, India decided to use the internationals leading up to the 2011 World Cup as stepping stones rather than as ends in themselves. While winning was important, it was not the only thing as India experimented with the balance of the team, with the bowlers who would be in for the long haul. This helped in the final result, although they did lose some games in the months before. It was, in hindsight, better to lose a couple of battles if it meant that victory in the war was guaranteed.

That there are just three certainties for the 2015 World Cup as of now (injury and politics permitting) - Dhoni, Raina, Kohli - means that there are more vacancies in the team than there was at the same juncture the last time around.

That is all the incentive the players, from those established to those on the fringes, need.

"We had no concept of selecting specific players for the one-dayers," said Wadekar, of the bad old days. That, fortunately, is no longer true.

Comments
Topics mentioned in this article
Cricket India vs England 2012 Suresh Raina MS Dhoni Yuvraj Singh Rahul Dravid Cheteshwar Pujara
Get the latest updates on ICC T20 Worldcup 2022 and CWG 2022 check out the Schedule, Live Score and Medals Tally. Like us on Facebook or follow us on Twitter for more sports updates. You can also download the NDTV Cricket app for Android or iOS.